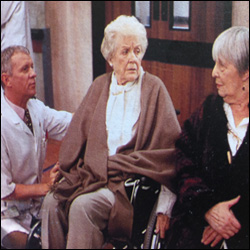 It’s new consultant Jack Hathaway’s first day, and he is obviously keen to impress. He shares his love of biking with Matt, and also tries to impress him by talking about computerized reception systems as well as making baby talk with Charlie, and goes over Baz’s head to perform a risky operation normally only undertaken by neurosurgeons, in resus, much to the delight of nurses Jude and Gloria (as well as a barrage of medical students), who think the whole thing is very exciting. Baz, however, is not impressed at his taking over of her patient, and stands at the foot of the bed with an almighty glare in Jack’s direction all the way through the procedure, just waiting for it all to go wrong, but is later forced to concede defeat as the patient pulls through thanks to Jack’s intervention. Later, in her office, Jack tells Baz that he doesn’t need to earn her loyalty; he expects it right from day one, and makes it clear he won’t tolerate this kind of thing again in the future.

The episode also features a group of three elderly ladies, one of whom is being forced to move out of the nursing home where she lives with the two others. They construct an elaborate plot to stop her from being found by the people taking her away, however this ends in disaster when she suffers a stroke whilst bombarded inside her room. The nursing home staff break in through the window, to discover her unconscious on the floor, and she is taken to hospital where she later suffers a further stroke and dies.

A man in reception is complaining loudly about waiting times, and isn’t very pleased when Matt asks him not to use his phone inside the department. Later, he becomes aggressive, and Matt screams abuse at him across the reception desk, leaving Charlie with no option other than to inform his managers.

There is some tension between Matt and Jude at the beginning of the episode – they are clearly uneasy with each other, but the same time attracted. Later on, after the incident with the man in reception, Jude goes out to the car park to comfort him. They talk briefly about the night they shared together – Matt said that although he was drunk it wasn’t a one night stand, Jude says that she honestly can’t remember it and decide that they should stay as friends, but Matt obviously doesn’t agree – he watches her walk back into the department with a sad look on his face. Love also appears to be in the air for Richard and Gloria, who go out for a curry after the shift.

A pregnant woman, Faith, and a man, Owen are about to get into their car to go to a wedding, when a cyclist travels down the pavement. Owen pushes Faith towards the car out of the way – she falls heavily on the side of the car, and he is not quick enough and is run over, hurting his leg. The cyclist keeps on going. Later in the hospital, whilst watching the man and Matt arguing, she goes into premature labour and the baby is delivered by Richard and Gloria in cubicles, with a nervous Sam comforting the mother! After looking at Owen’s X-Ray, Richard suspects that he may have osteoporosis, linked to testosterone deficiency. It later transpires that Owen is Faith’s dad, and not her fiancé, as had been previously thought, when her real partner turns up with her future step-mother. Faith decides to call the baby Owen.

Elsewhere in the department, 2 young girls, Ruby and Tina come in, and are obviously working underage in a factory. A man comes into the cubicle and hands over money to Ruby, telling her to keep quiet – Jude, however, spots this, and it later transpires he was their boss, paying her to keep quiet. One of the girls, Ruby, has a bad fracture to her arm, and needs an anaesthetic for it to be manipulated, however because the team can’t get in touch with her parents, they’re reluctant to go ahead. Eventually, Jack agrees to do the procedure, and bullies Monica into doing the anaesthetic; saying that if she won’t then he’ll do it himself.

Their story really gets to the team, but particularly Baz, who gets infuriated by the situation – later, she confides in Charlie, telling him that since Louis was born, she can’t detach herself from work anymore. He presents her with a teddy, which one of the ladies working in the canteen had given him for Louis, which cheers her up a bit, until she reads the label – “Made in Britain”

28 year old male – Right side extradural haematoma after falling from a garage roof.

Owen – Man who was run over by bike. He has a fractured foot, and is later found to have osteoporosis and testosterone deficiency.

Man:- Off you go then, I’ll wait here for you

Ruby:- [getting out of car] OK

Charlie:- You look fed up, are you alright?

Baz:- Ahhh well, that Behr hole episode left me feeling a bit stupid…[they share a knowing look and she advances into his office, shutting the door behind her..] no, it’s those kids, Tina and Ruby

Charlie:- Social worker not here yet?

Charlie:- I’ll keep an eye on them, don’t worry

Baz:- I can’t help it, I used to be able to switch off but, since Louis. I can’t believe that parents allow their kids to be exploited like this. What kind of a society are we? We pretend we have values, whilst at the same time demanding more and more things, while at the same time shutting our eyes to how those things are made and where they come from – it’s not right!

Charlie:- [hugs her and kisses her forehead] I’m sorry you’ve had a bad day. Why don’t you go home and give Louis a big kiss from me?…. I forgot, Jan, from the canteen, gave him this little guy [He passes her the teddy]

* Jude and Gloria have never seen Behr holes done before.