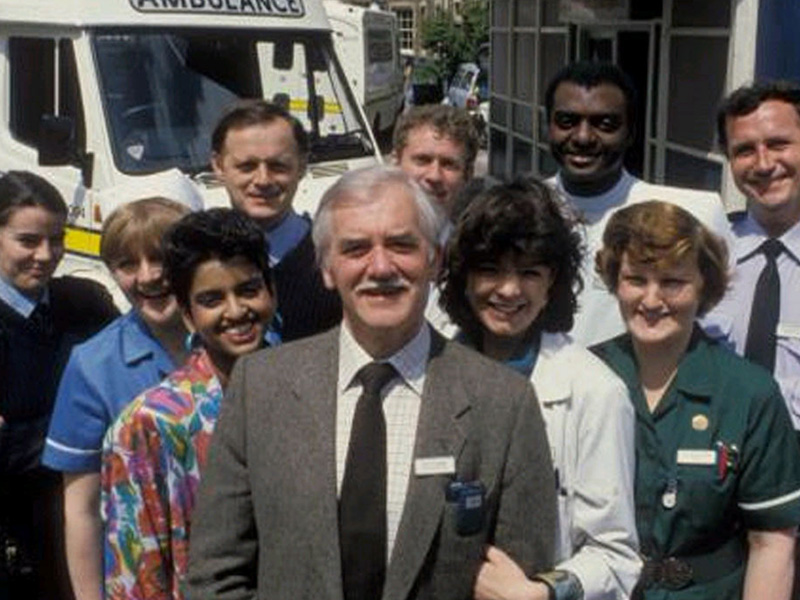 It was 1986, and BBC’s Head of Drama Jonathan Powell was searching for a new Saturday night drama series to replace cop show Juliet Bravo. The BBC had two ideas for a hospital drama – the ‘cottage hospital’ idea, which was seen as the safe option or an A&E department (‘Front Line’ – as Casualty was originally titled), an off the wall idea which posed more problems for the team. ‘I went for Casualty’ said Powell about his decision. ‘Because there was a feeling of life and passion and, well, I was anxious for new young people to create something. I put them (creators Jeremy Brock and Paul Unwin) with a very experienced producer, Geraint Morris, and hoped for the best’.

On 6th September 1986, Casualty first hit our screens in an episode entitled ‘Gas’. One of the first scenes showed a young Charlie Fairhead (the show’s now longest serving cast member) driving to work in his old yellow beetle car, ‘Lover Boy’ blaring meaningfully from the radio. He arrived at Holby, stubbed out his fag on the ground with his foot as Ewart Plimmer was heard barking orders at an ambulance man. When not rowing, Ewart was feet-up at the untidy desk of his poky office, walkman headphones clamped to his ears.

As the 15 episodes were aired, we grew a fondness with each of 10 main staff members who all had their individual strifes and woes; Nurse Duffy, who back then was daffy and naive with a strong West Country accent lost her confidence after being raped on her way to work, black Staff Nurse Clive King who frequently suffered racial taunts from patients and got through each shift with the help of a whisky bottle kept in his locker, gossipy receptionist Susie Mercier who had a firm way of keeping patients in line, saintly SEN Megan Roach who faced a hysterectomy after cancer and potty Polish porter Kuba Trzcinski, a Royal devotee who hoarded ‘borrowed’ eqipment from other wards in his Porters’ lodge.

Love interest came in the form of paramedic Andy Ponting who was having an affair with his colleague Sandra Mute and ofcourse the infamous Charlie / Baz saga which resulted in Baz having an abortion without telling him at the end of the series. And had fled by the next series.

On screen the hospital A&E night shift was fighting to stay open, meanwhile the show Casualty itself also struggled to stay on-air after being slammed by the Government. The Royal College of Nursing also objected and nurses resented how they were being portrayed.

After eight episodes, Jeremy Brock was called in by the BBC management to defend the series. Changes were made such as cutting down on characters smoking, but the show stuck firm to its stories about NHS funding and hospital conditions. And after all the controversy, Casualty looked unlikely to make it past it’s first year.

In this article:Cas Series 1, Casualty Series