A man gives chase to a hoodie who has snatched his mobile and laptop bag, and in the ensuing scuffle he picks up a broken bottle and stabs the robber – only realising too late she is a young woman. But their story only becomes more complicated  when both of them end up in the ED.

Meanwhile, a mother brings in her eight-year-old son with a broken arm, having fallen off a climbing frame – but Tom becomes suspicious when he sees bruises consistent with grabbing on the boy’s shoulder – and Louise is angry with Big Mac for taking pity on a homeless man.

In this article:Cas Series 27, Emma Goodwin

‘No Place Like Home’ : The mother of runaway George arrives at the ED, only to be told her son has been released into... 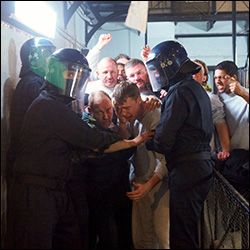