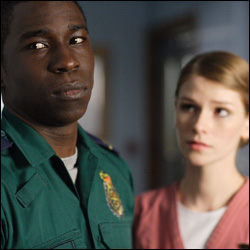 Armed police raid a suspected hide-out, but the raid goes seriously wrong for one officer.

Ruth is inspired both by Jordan and a patient to try to develop her life away from the hospital, but her attempts at small talk are full of medical minutiae and she puts off a prospective suitor.

Jessica, meanwhile, is elated to receive a package containing a DVD of her children – but she’s devastated there is still no clue as to their whereabouts. Adam notices that she’s upset and she finally tells him the truth about the mess her life is in.

There’s a fresh new face in the paramedic team – Polly – but, unfortunately, she’s arrived on the wrong day and Jeff and Dixie are bemused at her bouncy, happy attitude and the hugs she keeps dishing out.

Elsewhere, Alice keeps on at Curtis in a desperate bid to reconcile with him and is convinced he is hiding something. Later, the team is astonished when Big Mac is arrested.

* Big Mac’s full name is revealed when he is arrested; MacKenzie Chalk.