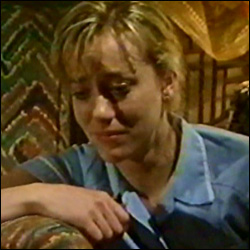 An old drunk, Sid, is brought in after falling down the stairs of his pub, injuring his leg. His other leg is wooden. He upsets staff, especially Norma and keeps mentioning his wife, but when he sobers up he tells Beth his wife is dead and hopes he didn’t say anything naughty when he was drunk.

A boy, Gary, is brought in after falling 22ft from a balcony at his friend, Jason’s house. But Julian discovers he has bite marks to his thighs. Trish questions Jason, who reveals they were forced to take part in a dog fight by his father, so he could take pictures. Trish is shocked.

A nun, Sister Margaret, is brought in with a fractured nose, which she says was caused by standing on a rake, but another nun, Sister Jean, tells Beth she lost her temper and hit her in a row over custard powder. Beth tries to hide her amusement.

A blind woman, Kath, is hit by a messenger, Dave, riding a bike, and regains her sight. Julian does not want to believe it to be a miracle. Pompous Dave, who has a twisted ankle, thinks he is now a hero, but the police give him a visit.

A young girl, Antonia, finds her alcoholic mother, Susan, collapsed in her bedroom. She dies in CRASH. Her workaholic father, Antony, arrives from Swindon and is unemotional at the loss of his wife, but says he will change his schedule to look after his daughter.

Duffy tells Charlie she wants to leave nursing and he tries to dissuade her, but she doesn’t finalise the decision and Paul is annoyed with her.

Charlie gives Kelly another talk, but Kelly becomes more fed up throughout the shift and ends up crying in the toilets. At home, Kelly takes a cocktail of pills and vodka.

* Sid Towers – drunk with injured leg from falling down steps of a pub.

* Sister Margaret – fractured nose after being hit with a pudding bowl spoon.

* Kath – blind women regains sight after being knocked down by a man on his bike.

Girl playing with cat, mother looking from window/ Duffy is in car with Paul, outside A&E;

Paul : I just want to make sure it wasn’t the Chianti talking last night, you’ve said it all before after all.

Duffy : Hey don’t give me a hard time!

Paul : Mmm, sounds like a good idea to me.

Duffy : Look, I’ll do it tomorrow, I promise.

(Kelly’s house, music playing, we go around room slowly, then see Kelly, who is drinking vodka and crying)

* Kelly’s intermediate report is at 3.30pm the next day.