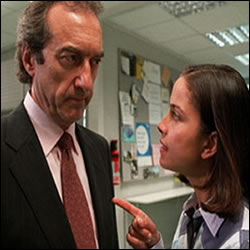 Meyer arrives at work and bumps into old acquaintance, Tom Campbell-Gore, and is also greeted by Holby’s chief executive, Jan Goddard. Jan speaks to Meyer in private and informs him that Sam has filed a complaint against him, claiming that there are a high proportion of deaths in his paediatric practice. Jan admits that there has been an increase in deaths over the last few years so she can’t just ignore the complaint. Sam’s complaint also alleges that Alex had doubts about carrying out operations, but Meyer bullied the team into going along with him. Jan tells Meyer that she has ‘total confidence’ in him but has to submit his surgical records for independent scrutiny.

Sam returns to Darwin Ward to collect her belongings and speaks to Alex in the locker room. She tries to convince him that she did what she did for them but Alex still refuses to resign with her. As they are arguing, new locum SHO Ed Keating, walks in. Sam offers Ed 2 pieces of advice: 1) Don’t question the myth, and, 2) Don’t sleep with the registrar. She storms out leaving an embarrassed Alex with Ed. Alex is shocked when Meyer then tells him that Sam has filed a complaint, and Alex is even more angry to learn that she has mentioned his name in it and that an informal investigation is to go ahead because of it. Alex pledges his support to Meyer and goes after Sam in the car park. He shouts at her, but she stands her ground and forces him to admit that he did have doubts. She warns him that he will go down with Meyer but Alex refuses to listen and tells her to, “Have a nice life”, walking away and leaving her upset.

After a routine visit to pregnant Sal Baxter, Lisa has to drive her and her husband to hospital when she goes into labour. Sal insists on having her husband in the back of the car with her, leaving Lisa to drive, and she manages to drive into a passing jeep. The driver gets out and offers to take them to Holby in his jeep since the car has a flat tyre now. They arrive at hospital in time to deliver a baby girl, Christine. Sal talks to the baby about her big brother, David, and Ben asks where their son is. It emerges that Lisa delivered David about 4 years ago, but he was run over and died when he was just 3 years old. Sal’s husband gets annoyed that she keeps talking about David like he still exists but she believes that he is still a part of their family. They argue and Sal admits that she blames him for David’s death because he was taking care of him at the time; he leaves. While he is gone, Lisa takes Sal and Christine up to Darwin so that they can thank Ed (and so that she can ask him not to mention that she was driving the car). Sal sees Glen and recognises him as the boy who was driving the car that killed her son. When her husband returns, she tells him and he rushes out again.

Glen Hale is a fourteen-year old boy waiting for a lung and heart transplant on Darwin. Meyer operated on him 7 years ago but Glen was taken into care so the hospital lost contact with his family. A social worker has accompanied him to the hospital, and Glen does nothing but make snide comments about him and then Chrissie, who is preparing him for surgery. Despite Glen’s rudeness, Chrissie continues to make an effort to befriend Glen, guessing that the way he acts is a front to hide how scared he really is. He seems happy when his mum comes to visit him, but she soon leaves after they argue. Chrissie tries talking to her and Glen’s mum confesses that a few years ago he stole her boyfriend’s car and knocked down a child whilst driving. She is ashamed of him and that’s why she can’t allow him to go home and live with her. Glen’s mum waits until he is out of surgery but leaves before he wakes up.

Meyer, Alex and Ed are scrubbing up before Glen’s operation when Jan arrives and announces that Tom will be watching the operation, for purposes of the investigation. During the operation, Sal’s husband bursts into the theatre and destroys some machinery while he is ranting about how Glen doesn’t deserve the operation. Glen’s life is put at risk and Tom suggests that they bring in a new machine. Meyer objects, he’d rather keep Glen on manual bypass because changing over to a new machine could result in brain damage. Tom instructs Ed to go and find another machine (Tom was Ed’s old boss) and they take Tom’s line of action. When they learn that Glen will make a full recovery, Alex begins to question Meyer and starts to think that Sam might have been right. Meyer thanks Alex for his support but Alex calls Meyer ‘arrogant’ because Tom was proved right yet he refuses to believe it.

(Meyer bumps into Tom Campbell-Gore in the hospital car park).

Meyer : Tom, what a pleasant surprise (They shake hands).

Meyer : Ah yes, I heard they restructured your department

Tom : Restructured’s one way to put it!

Meyer : So, you’re a long way from home. You here on business?

Meyer : We met when you applied for clinical chairman so, two and a half years

Tom : The right man got the job

Meyer : So what do we owe the honour? (They walk into Jan).

Jan : Anton, I thought you weren’t in until this afternoon

Meyer : It isn’t everyday that I’m met by the chief executive

Tom : We bumped into each other in the car park, just catching up on old times

(Meyer sits in an armchair at home, drinking whiskey and watching Jan and Tom speak at a press conference on TV).

Jan : A formal compliant has been received and we are implementing a thorough review of Mr Meyer’s surgical history, led by Mr Campbell-Gore, but at this stage I must emphasise that the trust still has complete confidence in Mr Meyer.

Member of press : Is it true that Dr Kennedy was sacked because she challenged Mr Meyer’s clinical judgement?

Member of press : She claims she did

Jan : Dr Kennedy resigned, that’s a matter of public record. However, all of this will be examined by Mr Campbell-Gore, in his review. Yes

Another member of press : Is it true that Meyer had a high proportion of child deaths?

Jan : Absolutely not. Anton Meyer is widely accepted to be one of this country’s finest cardiotherasic surgeons. I can guarantee this matter will be fully investigated by an independent enquiry

(Meyer switches off the TV).