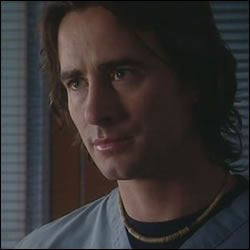 Kelsey takes it upon herself to tell the whole department about Cyd catching Greg and Andrea in the ambulance together. Embarrased about the whole situation, Greg tells Andrea that they should keep quiet about their relationship.

A farmer, Roger, discovers an unexploded WWII bomb in his field. As he goes to report it, his daughter, Carla, and her two friends head up to the field and are all injured in the blast. [ID 1902]Jeff[/ID] and Dixie arrive at the scene and realise they need a doctor – leaving Cyd and Greg to bring Andrea to the scene.

Cyd is upset that they are unable to save one of the boys, Ty, at the scene and by Andrea’s lack of empathy, whilst Carla suffers a punctured lung and spinal injuries and her other friend, Darren, needs his leg amputated, so he can be rescued before a further explosion occurs. At hospital, Roger realises his daughter isn’t quite as innocent as he realises whilst Darren’s alcoholic father is forced to confront issues.

A reporter, Russ, who was taking photos in a nearby churchyard when the bomb went off is admitted to the hospital and asks Kelsey to persuade Nathan to let him report on the aftermath of the bomb. But when cameraman Derek realises that Russ plans to ditch Kelsey for Nadia, he encourages Kelsey to take revenge.

By the end of shift, Greg tells Andrea that it is over between them. Andrea tells Nathan that she is quitting her position which pleases Nathan who had been getting grief from Selena. Greg tries to make it up with Cyd, but she walks away saying ‘I’m nobody’s consolation prize’.

* Kelsey on Nadia ‘If she was anymore up herself she’d be inside out!’