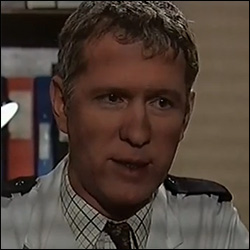 Maria, A Filipino woman with a cut elbow, escapes from a large building through a window in the roof and climbs down the fire escape. She tries dangerously to climb down the roof towards the steps of the fire escape. She gets down safely but a builder working nearby is concerned when he sees her and asks if she’s alright. She runs away from him but he follows her. She runs into a parking meter as she’s not looking and cuts her head. She’s taken into hospital.

Mary tells Adele that there’s a rumour going round – Queen’s hospital is closing and there’s going to be a merger – everyone has to reapply for their jobs but they’re not all guaranteed to keep them. Mike, Charlie and Jane have a meeting – Jane and Charlie argue.

In Casualty, Dave believes Maria has malnutrition but she won’t let him examine her. A woman, Yvonne, turns up and claims that Maria stole her handbag. Rachel recognises her – she’s met her at a charity dinner. Yvonne says she won’t press charges and that Maria can keep what she stole – she just wants to help her. She offers her a room in her house, but Maria says she doesn’t want it. Mike and Rachel later find cigarette burns on Maria’s back, and it emerges that she has been abused by her employer – the woman who’s bag she has stolen. She promises that she will tell the police how she has been treated like a slave. Yvonne tries to threaten her but she stands by what she has decided.

Mie tells Ash that she’s not sure whether she can take up the offer on a room in his flat. She says her uncle is thinking she is becoming too westernised and her parents want her to move back home.

A mentally ill man, Bill Truman, goes into a chemist and tells the assistant that he needs a certain type of drug. She tells him that without a prescription, she can’t help him. Angry, he pushes stock off the shelves. Later he sits down on a bench and cuts his face with a knife. He then stabs a woman, Linda, on some stairs when she blocks his way. He runs off.

Josh and Lucy arrive and take the woman to hospital along with her sister, who was with her. She is diagnosed with a collapsed lung. The man who stabbed Linda turns up later in A&E with his cut face. He causes a scene by standing on the reception desk singing hymns. Adele asks him who cut him but Charlie tells her that he thinks it’s self-inflicted and says he’ll talk to him. Linda’s boyfriend Stuart arrives and tells her sister Linda is pregnant. Stuart then tries to attack William and is restrained by Charlie and Ash. Linda’s sister tells Stuart he should tell Linda the truth – she realises that he doesn’t want to be with her. Later, Bill sees Linda and apologies.

A woman, Harriett, is brought in after a fall in a shop after being knocked down by a shop assistant when chasing a suspected teenage shoplifter. She’s bruised but otherwise unhurt. Later, when being taken home, she confesses to Frankie that she is addicted to stealing Gloves. She pulls out numerous pairs from her bag including hospital rubber gloves, and gives them back, saying that people shouldn’t steal from hospitals and she wishes she could stop.

[a man climbs some scaffolding, singing.]

[Yvonne sits down in reception, lighting a cigarette]

[She removes the cigarette and looks like she’s going to cry. Ash walks away and leaves with Mie.]

In this article:Andrew Holden, Cas Series 8