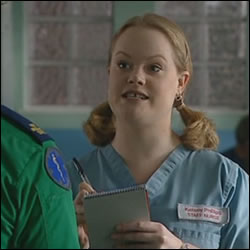 Nathan, furious about his needle-stick injury, is determined to find out who is responsible. Hal and his mother, Claudia, attend the hep b clinic. Claudia claims her son is an addict. When she faints, Hal is caught stealing drugs from the store cupboard. Maggie later discovers Hal has been covering for his mother, who is infact the addict. With the mayhem caused which include a minor ceiling collapse in the department, Nathan uses this as an excuse to close the clinic once and for all. Maggie is furious with him.

Meanwhile, Kelsey starts a rumour that Greg is gay when she sees him wearing mascara, and she and Nina make it their mission to find out. Greg guesses what they are up to and to prove he is straight he spins Nina around and kisses her playfully on the lips. Abs looks on, jealous.

Steve is playing ‘Buffy’ with his teenage niece when he accidentally impales his foot on a chopstick. Kelsey gives him advice on being there in her life, since his brother died.

A man, Jay, is brought in after a fight. With a girlfriend, two young children and debts he is desperate for some cash. He steals a flash car, which has been bought by Gethin for his girlfriend Karen as a gift. Jay is unaware that Gethin is hidden in the boot as he planned to jump out to surprise her. As Jay speeds off, he hits Karen who happens to be walking by and she is then taken to hospital. Later at the riverside, a panicked Jay who plans to drive off into the river, discovers Gethin is in the back but before he has a chance to rescue him, the car starts slipping. Jay is crushed trying to stop the car and dies in hospital.

* Jay – dies after being crushed by car.

* Gethin – injuries from being trapped in stolen car boot.* Hal – injured when falls through hospital ceiling.

In this article:Cas Series 20, Gaby Chiappe 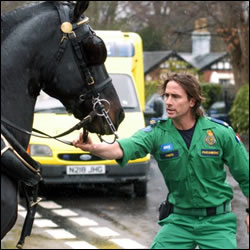