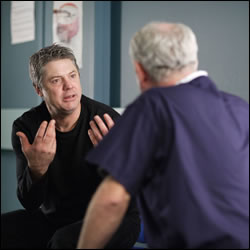 It’s the morning of the MIU (Minor Injuries Unit) opening. Simon, the new Clinical Nurse Manager, clashes with Charlie immediately – and literally – in the hospital car park. Marilyn tries to convince Charlie and the rest of the staff that the MIU will be a success. But Charlie is not buying any of it and accuses Simon of “canvassing for customers”.

Meanwhile, Bob and Gary perform a flying act at a “superhero” convention. Bob plays the “superhero”, Gary operates the wires. But their days as a double-act could be numbered as Bob suffers a nasty fall.

Noel is struggling to cope with the filing and passing on the wrong hospital notes could prove disastrous. Ruth gives him a hand and stands up for him when he is blamed. A near disaster is averted but Charlie and Simon remain in conflict.

Jessica and Adam have been flirting until Sean appears and Jessica panics. They argue but make up passionately.

Having spent most of the day sending emails to her “boyfriend'” in Afghanistan – blissfully unaware of Big Mac’s involvement – Kelsey complains to Alice that her internet love interest is too romantic.