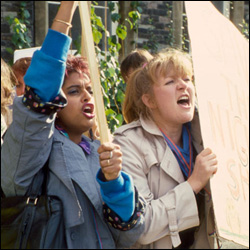 The staff hear the bad news; they are to be shut down in one month. They meet to discuss ways of gaining public support.

As Kuba is passing a warehouse on his bike, he witnesses a man, Bob, attacking another man, Lyndsey, with a baseball bat, after learning he has had an affair with his wife. He breaks up the fight, and Lyndsey is taken to hospital. Bob comes to the hospital, asking for Kuba, he cuts Kuba’s hand and threatens him so as he doesn’t tell the police. Ewart invites Kuba to spend New Year with him, for his own safety.

A missionary man, Mr Whitefinch, is brought in with suspected Lavassa fever, the hospital is evacuated, while the decontamination takes place. Charlie organises an impromptu pantomime to raise morale – they dress up in costumes and sing. Baz and Charlie exchange Christmas gifts.

As the axe falls on the department, Ewart and his manager look out the hospital window – they see all the staff (staged by Duffy and Susie) holding a demonstration.

Ewart is in his office using Dictaphone, Susie comes in and brings him a drink;

Staff hold a demonstration on the hospital forecourts – Ewart looks down from the hospital window, and smiles;

Manager : This your idea?

* Charlie has bought Baz for Xmas a three day break in France, she gets him a Rocky 4 video.

* Some of their costumes for the panto include Clive in a tutu, Charlie as a bear, and Ponting in a pink costume. They also sing ‘We’ll meet again’.