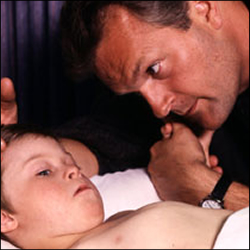 Ash is standing in for Charlie; the press are on his back as his case has been referred to the Crown Court – however he faces a three month wait.

Matt turns up late for his shift and seems to be having problems at home. Jude tries to get him to open up to her. Ash tells him off but they later shake hands and apologise, with Ash thanking him for agreeing to testify against Hitchens in court.

Josh is back on the ambulances with new paramedic partner Liz Harker. Inquisitive Liz questions him on why he decided to give up being a biker – Josh tells her after the mine incident, he realised he preferred working as a team.

Mike attends his local village rugby match as team medic. Team captain Frank Thorpe learns that his son, Rob, is leaving for a new life with his girlfriend in London. Rob decides to play one last game, but the match becomes violent as another player taunts Frank and he ends up being seriously injured in a scrum. Paramedics arrive and Liz, not knowing who Mike is, thinks he’s intefering. Back at Holby Mike discovers a dislocation in his vertebrae, Frank asks him to tell him worst case scenario, as a friend; that he may never walk again. Meanwhile, Rob decides to sacrifice his own future to care for him.

Roger Longford takes his down syndrome son, Tyler, to the local swimming pool, where Roger meets Patricia, with whom he has been having an affair with. He wants to end their relationship, but while he is explaining his decision, Tyler slips and cracks his head on a slide. At Holby, Roger’s wife, Anna, arrives and Roger tells her everything. Tyler survives, and his parents decide to stay together and try to work things out. Patricia visits and is upset to learn it’s definitely over between them.

Professor, known by staff as a loiterer in the department, is asked to leave a number of times during the shift. He then goes to the toilets and stabs himself in the chest with a knife, returns to the reception area and collapses. It’s a while before Jude notices him again and they take him to CRASH, where his injuries are found to be not too severe.

Mike tells Kate his fears about his family not coming back. ‘I’ve got a house,’ he says. ‘I’m not sure I’ve got a home.’

* Professor – stabs himself in chest with a knife.

Mike’s house; inside Mike is playing with his dog;

Rob : How is it, good? (regarding a pint he has just pulled)

Frank : Oh that’s good that is, you’ve got your grandad’s knack alright!

Ash : Well enjoy the rest of your day off Mike, I better go back in and see if I can find some more punters.

Mike : Well I thought I might grab a small pint at the Chequers.

Liz questions Josh about no longer being a biker;

Liz : Do you think I talk too much?

Liz : I’m just inquisitive, I’m interested in people. But I know I go on a bit, so if I do, just tell me to shut up OK?