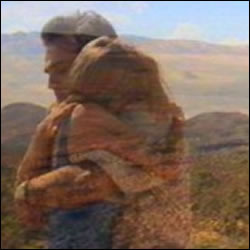 At the beginning of the episode, Holly and Gemma are lying on the road after Joanne, Gemma’s mum, had pushed them out into the road and into the path of a passing car. Both Holly and Gemma are conscious, and Joanne runs off, dragging Jake, Gemma’s brother with her even though he keeps shouting Gemma’s name, not wanting to leave her. Josh and Penny arrive on the scene later as they tell Holly she should wear a collar in case she has any other injuries but she says no and that she is fine.

When they get back to the hospital, Holly wants to stay with Gemma but she is then persuaded to go with Duffy to get herself cleaned up as she has a couple of nasty cuts and bruises, the police come in to speak to her asking her if she knew anymore information as to where Joanne is but she says she doesn’t so they then leave her alone again as Duffy continues to sort her out.

Much later in the episode, Joanne appears outside the department with her Jake and Zoe. Joanne Sends Jake inside to find ‘Doctor Holly’. Jake dissapears off inside the department then, a short while later finding Holly as he leads her outside to where Joanne is waiting. After pleading with Holly, Holly then takes them inside to see Gemma, on their way in one of the police officers notices them and follows them into recus. Consiquently, Joanne is taken away leaving Gemma, Jake and baby Zoe on their own as social services end up getting contacted.

In the Australian outback, Tina is laying by the roadside that goes through the deserted area, dehydrated and unconscious, desperately needing help. Someone goes to find Sean who is in the middle of a town area, he then gets in his 4×4 type car as speeds off into the clearing area as begins his search for Tina, this lasts for quite a while until he finally finds her a little later on in the program, he picks her up in his arms and rushes back to his car before driving back off to the appartment type place where she is then rehydrated.

A little later on once Tina is feeling much better again, after Sean has gone in to see her they are seen walking along the rocky area as they then decide to get engaged. They ring up Holby A&E department where Amy first answers the phone, Tina then speaks to Max before hanging up again as she tells them the news.

Leona then comes into the episode claiming to be off the alcohol as she finds Charlie to tell him the good news, Charlie then makes his way along to the gents, telling Leona to leave him alone which she seems to completly ignore. At the end of the episode Charlie is seen to be clutching his chest as he slides down the door he had been leaning against and down onto the floor with a pained expression on his face as he continue to hold his hands onto his chest.

A patient called Chris is brought into the department who has chains attached round the bottom half of his body and serious wounds surrounding his knee area. He has heamophilia. His friends, not knowing about his condition, had locked him in the boot of one of their cars to see if he could escape for a joke. However, the car is stolen and their other friend, Jenny, reveals to them why she is so upset – Chris may be in danger becuase of his condition. In hospital, one of Chris’ knees is said to be fractured so he won’t be able to go climing with his friends as planned. Jenny turns up to visit him and he says he didn’t tell the others as he didn’t want them to worry. Jenny expresses concerns about Chris going climing as he may be putting himself in danger but he dismisses them.

Another patient called Ray in the deparment who is waiting in the corridors with kidney stones who seems to be in quite a lot of pain as he waits for a cubicle to become available. A little later on a cubicle has come available as he is just about to me moved into it until another patient comes along who claims to be much more a serious case to have the cubicle instead. Towards the end of the episode the patient is on the phone then calls Adam over asking when there is going to be a bed available, he says he doesn’t know as he is going off shift, the patient then says that, that is what the last lot had said.

There is also another patient, Martin Cross, who is HIV and is dying. Near the end of the program, he goes into cardiac arrest, after Patrick persuades him to see his mother who eventually turns up. She sees Martin, then he dies.

*Chris – heamophilliac, cuts to both knees

Holly: Gemma, can you hear me?

Joanne: Jake get out of the way, Gemma?

Holly: It’s alright Gemma, everything is gonna be alright.

Holly: No your not taking Gemma. Don’t touch her!

Joanne: It’s nothing to do with you.

Holly: Yes it is, she is my patient. Gemma.

Joanne: Jake, do as your told!

[Charlie, having escaped from Leona, collapses in the gents suffering chest pains.]