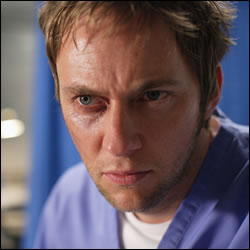 It’s the morning after the night before and Abs wakes up in a police cell covered in cuts and bruises while Adam wakes up next to Susie – last night’s catch. As Abs tries to blend into the ED on his last day, Adam is off somewhere having his wicked way with Susie – who’s spiked his drink – and his absence hasn’t gone unnoticed by Nick Jordan.

After raging at alcoholic patient Phoebe for abusing her body, Abs treats escaped prisoner Michelle. Meanwhile, a tipsy Adam returns to work and is given a dressing down by Jordan. When Adam injects a patient with medicine that Toby has already administered, and she starts fitting, Toby covers for Adam’s mistake, but Jordan knows something’s up.

Later, Abs is taken aback when the staff throw a surprise leaving party for him. As news comes in of a major road accident, everyone takes their positions as Abs slips out of Holby alone. Ellie appears and the pair share a moment before they leave.

Also, Jeff tries to protect Dixie when he suspects she’s being targeted by residents of the Farmead Estate, and Tess returns to the ED.