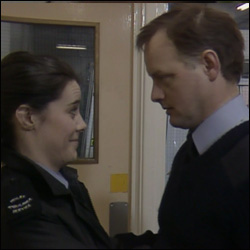 The night shift has been closed for six months, with Ewart Plimmer’s A&E department being open from 9-5 only – with emergencies at all other times going to Queens Hospital. At a cocktail party to introduce the new General Manager, Elizabeth Straker, Ewart meets her, and they are already in conflict.

A single parent, Joyce, has to travel twice as far to Queens, when her young son swallows temazepan. Two youths messing about in a car, crash into a motorcyclist, Steve. They run off when the police arrive. Steve, however, dies and his father, Phil Baker, is told of the news. Ponting believes his life could’ve been saved if Holby nightshift was open.

Charlie, in his flat, which he has been sharing with Baz, goes to wake her up – but she’s gone. She’s left him a goodbye note, Charlie is devastated and cries. Susie has been unemployed for 8 months, Megan is working on a ward with pregnant women, and Duffy applies for a new job, as Senior Staff Nurse at Stevens Hospital – she gets it. Mute and Ponting continue their relationship.

Ewart holds a meeting at Megan’s house, in the hope of getting the night shift re-open. They want public support, and lobby and drop leaflets. Charlie holds a winning speech at the board meeting, and Ponting even tries to get his journalist cousin to write an article, but it backfires when she instead writes one on children with leukemia. They also get Joyce involved, and Ponting asks Paul Baker too – but he is too angry. The staff and public go to a DHA meeting, where the managers are deciding the night shift’s fate. They are chucked out after making too much noise. They wait in the pub, till Carol, the NUPE steward tells them the good news. They have a victory celebration, although Ted is not happy – he feels Megan cares more about her job. Duffy is lured back, and Dr Mary Tomlinson asks Ewart if she can be his new Casualty Officer.

* Joyce brings in her son, who she thinks has swallowed temazepan

* Steven Baker, motorcyclist – killed when he collides with two youths in a car

(Both go to Queens hospital)

(We see a white car speeding down the road, we then see Joyce in her flat, with son, Eastenders in the background)

Joyce : I’m sorry to bother you, I think my baby might have swallowed some temazepan.

Nurse : How many tablets were there?

Joyce : I don’t know, they’re my husbands, the thing is I’m almost certain they were empty, because my husband would never have left them behind.

Nurse : Look, I think it’s important you bring your baby in…

Ewart : Do not smoke!

Megan : You’re being too serious, now drink that down, and come dance, come on…

(The staff all dance and Charlie smiles)

* One of Megan’s sons is called Sam. (played by John Fletcher)

* The General Manager at Queens is called Paul Marshall.

* Charlie is woken up at 7am, by the radio playing Spandau Ballet.

* Charlie lives in a small house, No.9, with a yellow door.