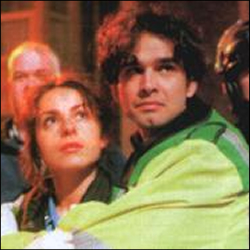 Penny and Josh arrive at a housing estate to attend to a teenage boy, Keiran Goddard, who has been shot. A large crowd has gathered in the flat with him and his mother, Karen. The head of the residents Association, Simon Powell tells them they don’t want the police involved.

At the hospital, Charlie and Max discuss how Mark is getting on at med school and Max’s talk with Mr. Meyer about Frank’s operation. Max and Eve treat a Romanian man, Marius. Max is worried that he’s not insured for surgery but Eve assures him it’s not a problem. Sean asks Chloe why Tina is telling everyone they’re an item. She tells him to ask her himself and he apologises. Eve suspects Marius has Crohn’s disease. Max wonders how she knows and is suspicious.

At the flats, Keiran’s mother blames Simon and the association for the problems on the estate. She knows who shot her son, Johnstone. A girl, Nicola is concerned and tries to calm things down. Karen says if they don’t do something about it, she will.

Simon addresses the crowds after Josh and Penny have left. He tells them something needs to be done about Johnston and the drug problems on the estate. They storm Johnstone’s door and tell him to leave. They start to punch him just as the police arrive and the fight it broken up.

Eve’s suspicions were right, Marius does have Crohn’s. She tells Max that he has a British wife. It’s her. She tells him he was tortured in Romania and Max says he’ll keep quiet.

Johnstone is arrested and demands a doctor. Simon rallies the residents and says they have to keep fighting.

At the police station, Pat, Chloe’s boyfriend and another officer go and see Johnston in his cell. He tells them he’s a hemophiliac and says they won’t have a case against him at all when a judge sees a doctors report. The residents march down a street towards the station. Simon and Nicola argue about whether it’s the right thing to do.

Penny and Josh are on their way to the station. Josh admits he put a bet on the night before but he’s agreed to seek professional help.

Keiran has arrived in resusc and has deteriorated. He goes into arrest. Sean and Chloe head off to the station with medication for Johnstone. The police interview Karen Goddard about Keiran’s involvement in the shooting.

When Keiran dies in resusc, Max is upset and heads upstairs to see Frank. Charlie has to break it to Karen that her son has died. When she sees him in resusc she spots track marks on his arm and realises he’s been taking drugs too.

The riot increases. Inside, Sean and Chloe have arrived. Sean asks the police why they didn’t do anything even though they knew what was going on on the estate. Josh and Penny defend their actions saying he doesn’t know what it’s like in the real world and things get heated.

Max sees Frank and tells him he’s proud of him but Frank doesn’t want to know. Max says he feels guilty. In the corridor, he spots a young boy with is father and goes back in. This time Frank apologises for everything he’s done and Max says he prayed that he’d get better. The two hug.

The police drive Karen back to her flat. She tells Nicola he’s dead. She starts looking around Keiran’s room and finds a shoe box in the wall with a gun and needles.

Pat has been hit by a flying bottle and Chloe treats him. Nicola arrives and tells Simon that Kieran’s dead and that he was a drug user. Simon tries, but he can’t calm the crowd down.

Sean thinks Johnston has a haemorrhage. The ambulance tries to leave but things have got worse and they start rocking the ambulance, even opening the doors and rushing inside. Chloe sees Nicola fall in the struggle but her and Sean manage to help her. Karen arrives and fires shots into the air. She tells everyone what’s happened and breaks down.

Johnstone and Nicola have arrived in resusc. Pat comes to the hospital to see Chloe but she is cold with him. She didn’t like his uncaring attitude or the way he handled the situation and walks off.

Sean and Josh meet by the drinks machine. Sean says he had never really thought about what happened outside the hospital before. They both apologise.

Chloe tends to Josh’s cut. She sits down on the cubicle bed when he leaves and begins crying. Sean comes in, she tells him she didn’t know people could act like that. They are both concerned for each other, Chloe says she was scared and tells him thank you, she couldn’t have done it without him. They start kissing passionately.

Chloe: I just keep picturing that girl, disappearing under the crowd. And the police…

Sean: Hey… You were great out there today.

(They hug then pull away.)

Sean: It’ll be alright. Everything will be clear in the morning.

Chloe: Thanks for today. I really couldn’t have done it without you.

In this article:Cas Series 13, Tony McHale