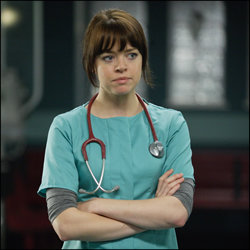 The New Year heralds a gruelling shift for the staff at Holby City ED, as this double episode sees the team pushed to the very limit when they deal with the aftermath of a horrific incident in a nightclub.

Dean, a loner, is standing at a bus stop when a group of girls from his school drive by and offer him a lift. Dean is infatuated with one of the girls, Orla, and accepts, but, when there is an incident in the car, Orla hurts her neck. Dean is told to get out of the car and Orla is taken to the ED.

A mistake in the assessment of Orla’s condition, however, puts her in jeopardy and Nadia decides to resign – even though it wasn’t her mistake.

Back at home, Dean gets angry with his mum, Kate, who quizzes him about a photo he has of Orla. He later goes to the Paradice nightclub, where Abs and Kelsey are also planning to spend New Year’s Eve.

Dr Zoe Hanna, meanwhile, runs out of petrol and is lost. She goes to the nearest house to ask for directions but the occupant asks for her help urgently. It’s Dean’s house and his mother, Kate, has been shot. Dr Hanna’s arrival, with Kate, at Holby ED, has a big impact on the team. Not due to arrive until the next day, she’s dynamic and driven, and everyone is wowed by her professionalism. Her dedication to help Kate, before she has even started, impresses the department.

Later, on the stroke of midnight in the middle of Paradice nightclub, tragedy strikes.