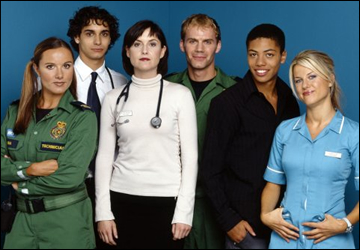 With another increase in episodes; Casualty runs nearly throughout the year. With just a two week break between Series 18 and 19, fans didn’t have long to get over their grief of losing Simon Kaminski in a plane crash, before being thrown into the grips of a harrowing opening double episode. Gone was the usual major incident that usually opens a series, but that wasn’t to mean it was any less dramatic as viewers watched the trauma of a mother whose two children goes missing; one of whom is eventually found dead.

Series Producer Mervyn Watson said, ‘The two part episodes we’ve screened in the past have always been successful, with the Sunday night episode proving to be particularly popular. The difference this time is that we’re telling a different story – rather than staging a disaster, we wanted to highlight the strains the emergency services face.’

After 19 years, Watson explained why he thinks the show is still a success, ‘19 years is a remarkable achievement. I think it’s because we’re constantly reinventing ourselves and we don’t take ourselves for granted.’

After the loss of some key characters last series including Lara, Simon and Nikki, viewers were anxious if Casualty could maintain it’s success; they brought in the return of Selena Donovan, bringing mixed emotions for troubled Harry, newly arrived Nina’s step sister Ellen Zitek out to cause a storm, Tess’ son Sam Bateman, new SHO Guppy Sandhu and paramedic Woody – who arrives to replace Fin, who is tragically killed.

With the influx of new characters and a promising series opening, Series 19 was looking good. And at Christmas, fans were delighted to see Casualty and it’s sister show Holby City pair up for the first time for a double episode, which resulted in the death of Paediatrician Jim Brodie.

The most memorable storyline this series was that of receptionist Bex Reynold’s rape ordeal at the hands of nurse Claire’s brother Pete which happened mid-way through the series. Actress Sarah Manners was determined to do the storyline justice, ‘The issue of acquaintance rape is extremely sensitive and Adam James, who plays Pete, and I, both knew we had to get it just right’. The story was carried throughout the rest of the series, from the court case which resulted in Pete’s acquital, to Bex pushing Pete to his death and to the episode finale in which suicidal Claire ploughed her car into the harbour with boyfriend Luke and Charlie inside.

In this article:Cas Series 19, Casualty Series