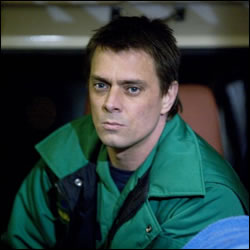 It is the day of Sol’s football trial but he and his friends Cameron and Reuben go to buy drugs. When they realise the dealer, Frankie, is out they break into the house, with Sol reluctantly joining them. Over at Holby, Luke tells Comfort he is going to the footballer trial to support Sol and has high hopes for him. Sol wants to leave the dealer’s house and go to the trials but the drug dealer returns. A fight ensues and Sol hits him from behind, his friends steal the dealer’s bag and make their escape. Once they get away they open the bag – finding drugs and a gun inside. Cameron was stabbed in the fracas and Sol wants to get him to hospital but Reuben is adamant they should sell the drugs on and makes a phone call arranging this.

Sol calls Luke and tells him his friend has been stabbed. He begs him to come and treat him. Luke tells Comfort who tries to talk him out of it but he is worried and wants to go. Comfort agrees to go with him. When they get there Luke tries to give Sol cab fare so he can still get to the trial whilst they treat Cameron but just then Reuben pulls the gun out – he wants Luke and Comfort to drive them to the location so they can sell the drugs. Although Luke tries to talk him round, Sol helps Reuben and takes Comfort and Luke’s radio’s and mobiles. Elsewhere, the dealer, who is being treated at Holby gets a call telling him about the sale.

Luke and Comfort drive the boys to the remote location where the sale is taking place. Reuben starts to panic and shoots the ambulance tracking device so they can’t be found if the panic button is pushed. Cameron’s condition is worsening and he needs urgent medical assistance. Later, Sol presses the panic button. Back at Holby Josh gets the signal and Nina and the team worry about Luke and Comfort. The drug dealers arrive at the remote location. Reuben tries to do the deal but it all goes wrong and the dealer gets shot. Reuben runs off but is also shot. Luke jumps out of the ambulance and dodges bullets to pull Reuben to safety. Comfort desperately tries to start the ambulance but a dealer shoots at her – the bullet goes through the window and the smashed glass goes in her eye so she can’t see. Luke takes over and they speed off with the dealers behind them. Sol throws the drugs packet out of the window and it explodes on the dealer’s car window so they can’t see and swerve off the road.

Luke and Comfort rush in with the casualties. Comfort is angry when Luke continues to defend Sol. Luke talks to Sol and tells him to go home to his mum in Sierra Leone. Sol says he wants to but then he will have to give up on football. Josh wants to know what happened and Luke admits it was his fault – he shouldn’t have responded to Luke’s call. Luke tells Josh he’s resigning. He talks to Sol and says he will go to Sierra Leone with him to coach him. Sol is overjoyed. Sol types up his resignation letter and gives it to Josh. Josh and Comfort try to talk Luke out of leaving but his mind is made up.

Meanwhile, Guppy and Kelsey treat a woman, Joy, who is injured when a wardrobe collapses on her. After learning Joy is finding it difficult remaining a virgin with her partner, Kelsey is shocked to discover that Guppy is also still a virgin. She offers to set him up with some of her mates but Guppy isn’t interested.

* Reuben – dies after being shot.

* Frankie – drug dealer with fractured arm. Return after being shot.

* Joy – nail stuck in back after wardrobe collapse.

* ‘Why is everyone so obsessed with sex?’ Guppy asks Kelsey, who then whips open the curtain to find Joy and her partner in a passionate embrace.

* Nathan arranges after shift drinks and only Guppy and Alice show up.