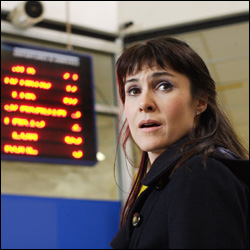 Toby decides to withdraw the allegation against Ben, in this visit to Casualty. In his naivety, Toby thinks this will make things better, but it doesn’t. Ben, however, is furious. Later, at the staff party, he drunkenly insults his colleagues and makes a life-changing announcement.

On his way home Toby becomes trapped in a rowing boat, which starts to sink. Unable to release his foot, there is no one around to hear his cries for help.

Jessica, meanwhile, confesses to Sean about Adam and is relieved when he forgives her. However, she later discovers that forgiveness was the last thing on his mind and that he has hatched a plan to abduct their children.

The hit-and-run charges against Zoe are dropped, but she loses her new job, nonetheless. Ruth struggles to bond with her team-mates and looks into an opportunity in another department.