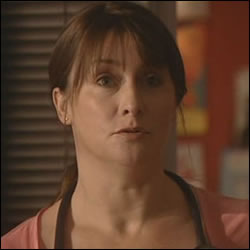 Two men from the Health Authority are visiting the hospital today and Nathan is feeling the pressure. It is a chaotic day and the team is keen to impress.

Maggie walks in on Selena and Nathan kissing. Selena tries to explain but Maggie is angry and thinks that Nathan is favouring Selena because of their relationship. The atmosphere between the pair is tense and when they treat a patient together it doesn’t help the situation.

Meanwhile, Comfort gets dressed up for her date with Sean, but doesn’t realise that he is taking her on a picnic. Things get off to an awkward start but the pair soon share a passionate kiss.

Andy is brought in with an arm injury after falling from a ladder. His fingers have swelling, but he doesn’t want his ring removed or damaged. Later his girlfriend, Lucy, is running from a man, Robin, who she thinks has been stalking her. We later learn Robin is a former love of Andy, they argue in the toilets over telling Lucy. Andy hits him and he falls and hits his head, suffering a hematoma.

A farmer, Joseph, orders two sisters, Mickie and Suzie, who are walking their dog off his land. Later he accidentally shoots Mickie as he aims for a fox. He takes her to casualty, where she has a pellet in her thigh. As her condition deteriorates, Kelsey notices something which is at first dismissed by Selena but later leads to an Adison’s disease diagnosis.

Kelsey has a crafty cigarette in the toilets following a stressful shift. In her rush to put out the fag when Selena comes in to praise her, it sets off the fire alarm and sprinklers – just another negative incident witnessed by the Health Authority.

* ‘Am I right in thinking you’re going on a date with the love god?’ Kelsey teases Comfort.

* Maggie is furious after seeing Selena back together with Nathan and how she kept it secret, ‘What you didn’t want knowing is how you got your promotion and your computer’.

In this article:Cas Series 21, Rachel Flowerday