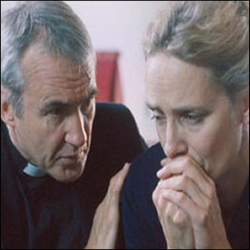 Tina sees Chloe sitting in a corridor looking ill. She asks if she’s all right, then says if she’s in that state she should go home. Later Eve catches Chloe taking paracetamol from the drugs cupboard; she says she’ll get some of her own later but was feeling really rough. Duffy tells Chloe she has to make a decision; Chloe says she decided yesterday to have a termination, and went out last night and got completely plastered. But she doesn’t sound sure that’s what she wants. Duffy says she needs to talk to someone about it; she says Tina was the only one she could have talked to.

Duffy tells Max she owes him a meal after he got her car fixed last week. He tells her she doesn’t owe him anything and she replies that a meal with him would be a pleasure. He asks if her husband will mind; she just says it’s his turn to baby-sit. He tells her he’d like to spend some time with someone “who has a pulse, and can breathe unassisted.” She tells him jokily that he says the nicest things.

Maggie Kavanah (from last week’s episode) is still looking for her son Andrew. She comes into A&E to put up some posters.

Eve is feeling guilty over what she did for Gerry. She talks to Sean and later to Father Peter Harker, a hospital chaplain, saying that she had no right to make a judgement on how much longer he lived. She now thinks she was acting in her interests, not Gerry’s. She says when she gave Gerry the injection she wasn’t thinking like a nurse. She says she doesn’t want the responsibility any more; she doesn’t want to play at being God.

Holly finds Fay, an old woman, near the entrance; Fay says she’s about to go home but isn’t moving anywhere. She eventually tells Holly she’s scared of going outside as she hasn’t been outside for three years, since her husband died. She was brought in by ambulance. Holly takes her to the ambulance bay doors and tried to persuade her to go outside. She steps outside herself to show how safe it is, then falls on purpose. Fay rushes out to see if she’s OK, and Holly has succeeded in what she wanted to do.

Adam goes for his interview. He asks Duffy to wish him luck but she won’t; she just says, “May the best man win.” Eve asks him about whether nurses should have to take on the responsibility of whether someone lives or dies. Adam says it’s not just about responsibility but about caring She later informs him that they will offer him the post. Duffy says, “I’m sure you were an outstanding candidate.”

Sunny faces his disciplinary hearing. Parminder, his union rep is speaking for him, and Charlie is also trying to defend him. Sunny gets fed up with everyone putting words into his mouth and says that the bloke he hit was an obnoxious little prat and he’s glad he did it. He loses his temper and storms out, saying he resigns. Parminder tries to get him to go back in and apologise but he won’t. He goes back into A&E and tells Tina what happened, saying he can’t take it any more. Tina tells him he gives good advice and he should think about it. In the staffroom Charlie has a go at him, saying the heroes are the ones who keep their temper and that Sunny was as bad as the guy he hit.

Joe Doyle has just had a check-up as he has bad asthma and is leaving with his mum. They speak to Father Peter on their way out. As she drops him off at school they argue as she doesn’t like his new friends. He goes off with his friends Spud and Craig and they bunk off school. Spud and Craig start asking Joe about why he goes to church; they decide to go to his church to find some valuables to nick. Joe doesn’t want to but can’t stop the others. They go in and open a cupboard and are rooting through when Father Peter comes in. He stops them and tells Joe that his mother will be coming soon for a meeting. They run off to the park, where Joe realises he’s lost his inhaler. He persuades Spud and Craig to go to his house so he can get his spare; they’re going quickly and he starts an asthma attack and collapses. Spud tells Craig to wait with him while he gets help, but when the ambulance arrives Craig has gone. Joe is taken to Holby A&E, critically ill.

His mum Ruth arrives in A&E; Eve makes it clear there isn’t much hope and Ruth asks to see him. Father Peter is also there; Ruth wants him to go with her but he won’t. The team decide to stop resuscitation. Peter hears Ruth crying and goes into resusc, and tries to pick up Joe. He says Joe is his son. Ruth is angry with Peter because they never told Joe who his father was. She says he was ashamed of Joe. She walks out, and Peter goes after her, shouting that he loves her. Sunny restrains Peter, staying calm and calming down Peter. As he comes away Charlie smiles at him. Sunny winks at him and leaves. Peter later tells Ruth he’ll give up his priesthood so they can be together; she says it’s too late now, it’s not what she wants.

Penny gets a taxi to work; the driver is Mike, a fellow paramedic. He has been moonlighting as a cabby to make ends meet. Penny is angry; she tells Josh about Mike. Josh talks to Mike, telling him he’s putting lives at risk. He says he won’t report him but makes him promise to stop moonlighting. After dozing off at the wheel and running off the road, Mike agrees to do so. Near the end of the shift Josh and Penny are called out to an RTA. Mike has crashed his car and been thrown out of the windscreen. He is unconscious and is taken to resusc, but dies.

Eve is sitting in the hospital chapel. Sean comes in. Eve is thinking of resigning. She says she denied Gerry’s sister the chance of seeing him before he died. Sean says he wishes he could make her see that she’s done nothing wrong. She says, “We tried really hard to save those two lives today, didn’t we? But I didn’t fail when I ended Gerry’s life. That’s not the kind of nurse I want to be.”

– Fay, an old woman that does not want to go outside.

– Joe Doyle, a 12-year-old that dies after having an asthma attack.

Charlie: Listen, do you wanna take some time off?

Eve: No no. I’ve got some E grade interviews this morning.

[Eve is sitting in the hospital chapel, Sean goes there to talk to her.]

Eve: I supposed I should go.

Sean: So what, you’re thinking about resigning?

Eve: He was a minister, Sean.

Sean: So, if he hadn’t been a minister it would’ve made a difference?

Eve: No, I mean I had no right to. Sister wanted to see him, I denied her that chance. It was up to God to decided when he went, not me.

Sean: You could have let Gerry die a horrible, agonising, terrifying death or oyu could have done what you did, which just gave him some comfort and dignity. As far as I see it there’s no choice. I know what I would’ve done.

Eve: There’s always a choice. You sound as if you’re trying to convert me.

Eve: We tried really hard to save those two lives today, didn’t we? But I didn’t fail when I ended Gerry’s life. It’s not the kinda nurse I wanna be.

Sean: I gotta go, do you want a lift home?

Eve: No, I think I’ll stay. Sean, thanks. Thanks for trying to help

[They both smile and Sean gets up to leave.]

Sean: It’s nothing. See you tomorrow.