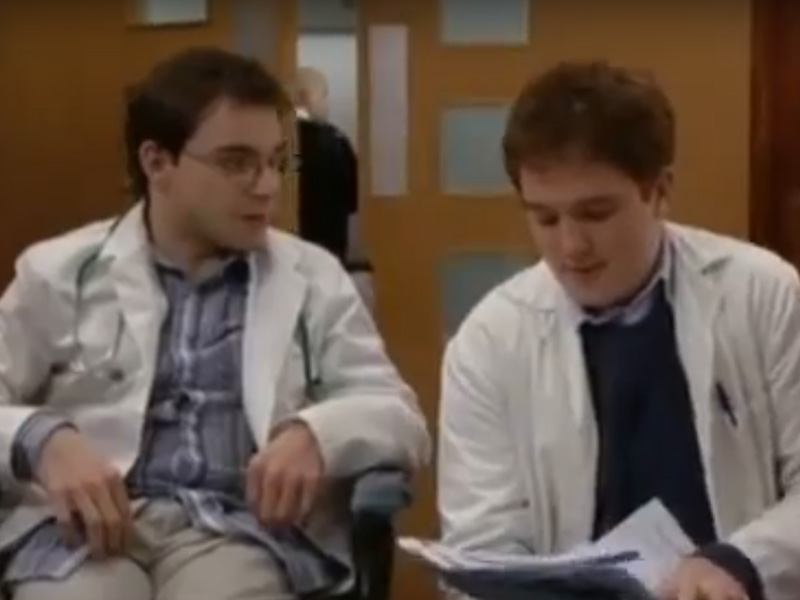 It is student doctor’s Matt and Dean’s first day at work. Matt gets off to a bad start when he bumps into Owen, spilling coffee on him. Without realising who he is talking to, Matt goes on to say he has heard Owen is an ogre. Dean arrives late and Matt gives him a hard time, resulting in a strained atmosphere between the pair throughout the day.

Their first patient is Mary Sefton, who has been trying for a baby. Owen performs an laparoscomy to see if her fallopian tubes are blocked – they are not. However when she starts bleeding heavily, it is discovered she is pregnant already when the dye used in the test has caused her to miscarry. Dean and Matt assist Owen with another operation on Mary, when he health deteriorates. Dean has a spasm in his hand and cannot give an injection fast enough so Owen tells Matt to do it. When Dean protests that the spasm would have been over within a matter of seconds, Owen loses his temper and shouts at him. Later, Owen warns Matt to work on his abrupt bedside manner and Dean that he will not make allowances for his cerebral palsy.

Connie questions why Dominic Fryer died last night, she says she will be holding a thorough investigation and wants to speak to everyone that was in theatre. Connie is suspicious of Diane’s behaviour and watches her carefully during an operation. Owen finds out that an investigation into the death is being held and asks Diane why she did not tell him – Diane is cagey. Connie interviews Diane and asks why she was arguing with Dominic. Diane reluctantly tells her that they were once an item and when she finished it he would not take no for an answer. Connie is angry, telling Diane she will halt the meeting in order to give her time to digest this news. Later, Connie calls Zubin, Ric and Diane into her office. She says that the post-mortem has revealed that Dominic dies of anaesthetic overdose and she will be formally investigating Zubin.

Chrissie is still annoyed with Mark, but he cannot understand why she is so upset with him. She tells Tricia that she wishes they had not been re-united. Later, Mark tries to talk to Chrissie but she is not interested. She decides to go for drinks with Tricia that night to catch up.

A mother, Suzie, is brought in after attempting suicide. Donna recognises her from the papers as she left her children on their own for a week and they got taken away from her. Suzie resists being treated and Ric wants her sectioned, however Zubin thinks she has another underlying problem which he eventually discovers is mercury poisening from where she works.

Mark helps treat homeless man, Henry, after he is beaten up. He reunites him with his long suffering brother, before Henry’s condition suddenly worsens and dies.

* Henry Markham – dies after being attacked.

* Donna tells Zubin ‘I know what it’s like to grow up without knowing your Mum.’

* Dean jokes with Owen ‘I find pulling nurses a bit difficult at times, can you help with that?’

* After both being disciplined by Owen, Matt says ‘Looks like I’m not the only idiot around here.’ Dean retorts ‘Don’t talk about Owen like that!’