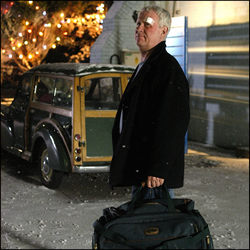 Charlie is on his way to work with Louis and Tess. He stops to buy a newspaper and chats to a woman in the shop. When she leaves the shop and crosses the road, she is hit by a car and dragged underneath it. The car doesn’t stop and Tess and Charlie rush outside to help.

Meanwhile, a Santa comes into the ED after being beaten up by kids in the shopping centre. As he describes the gang who attacked him, it sounds like Louis might be involved.

Later, Sara arrives, having fainted on a bus. Toby discovers Sara was pregnant, but lost the baby. She is reluctant to talk about it and denies everything. Charlie, meanwhile, gets a mysterious call, which leads him, Dixie and Jeff to a medical centre – where they find an abandoned baby wrapped in blankets.

On the way back to the ED, Charlie thinks he sees Louis. He loses sight of him but spots the car involved in the morning’s hit and run, and calls the police. There’s an altercation and the driver, Jason, punches Charlie and runs off. The police give chase, but the driver injures himself and has to be taken to the ED.

Back at Holby, Charlie and Jason have another row and Charlie punches him. Harry later has no choice but to ask Charlie to resign.