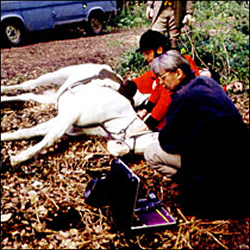 Duffy finds out she has been referred to have a biopsy, but has to wait six weeks. Sandra asks Julian to pull some strings and manages to get her to the front of the waiting list. Kate Miller is happy when she gets funding for the new triage, but she is called out infront of Simon and is told to leave. He moves her to another department working in Community. He takes over her position and immediately gets rid of the agency nurses. Staff are angry and are sad to see Kate leave.

Jane’s got a white coat on, she’s in the department for a refresher course, but is annoyed that Julian isn’t paying her much attention. Ash went to the Bank, who have agreed to pend his debt for six months.

A woman, Ruth, is raped by her ex-husband. At the station with her friend, Mark, another stranger, James, is too friendly towards her, agitated she jabs her keys into his face. At A&E, Duffy uses her past experience to help and support her and even agrees to go to the police with her. James, however, who is having stitches, calls in the police to make a complaint, but with some persuading drops the charges.

A fox hunt saboteur, Miles, is struck by a horse at a protest. He dies in surgery and his female friend is distraught at such a waste. The horseman, Gerald, suffers a broken humorous and fractured ribs, and his horse dies. His nephew, wants to press charges against his wishes.

And a young girl, Ally, gets herself in trouble with a DIY tattoo on her arm, that has turned septic.

At the end of shift, Sandra thanks Julian for his help over Duffy’s biopsy, he offers her a lift home and in the car they kiss.

* Ruth Shepherd – assaulted and raped by her ex-husband.

* James Bennett – stitches in face after being jabbed with keys by Ruth on a train platform.

* Miles Granville – fox saboteur, dies after being struck on the head by a horse.

* Teenage girl, Ally – septic arm after tattooing her own arm.

Ruth is in shower, upset, she then takes off bed clothes and washes them desperately.

Sandra : And you can cut the wounded soldier routine. You know, arrogant sodness suits you.

Julian : You’ve got me all worked out haven’t you?

Julian : Yeah, definitely have… (they kiss)