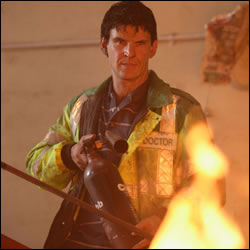 The action begins as a film crew are in the hospital making a documentary about the Emergency Department – and they’ve picked a fateful day to film.

On the local Farmead Estate, teenager Sammy Malone is causing havoc with some fireworks. She fires a rocket up into a stairwell, with disastrous consequences.With the film crew in tow, Jeff, Dixie and Adam arrive at the scene and start to treat an injured resident. The site soon becomes unstable as the repercussions continue. Unbeknown to any of them, the rocket has caused a fire, which in turn causes an explosion. Soon the fire is out of control.

Sammy has taken herself to the ED with a burnt hand, and causes more disruption. She clashes spectacularly with Tess, insulting her and then disappearing. Tess won’t let it lie, and during her break she goes to Sammy’s house on the Farmead Estate to have it out with her – but Sammy isn’t there. Tess eventually spots her and chases her across a demolition site, but falls, impaling herself on a metal rod. Sammy won’t help – instead she films Tess’s injuries and then runs away, ignoring Tess’s pleas and cries.

Dixie and Jeff start to head back to ED with an injured woman. As they turn on their sirens and drive out of the Estate, Sammy runs into the road and, hit by the ambulance, is flung into the air. Dixie, who is driving, is in shock when she sees what she has done.