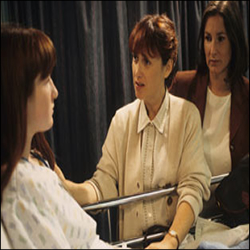 The team discuss Ash’s incident. Ash is charged with ABH and awaits a court hearing. But he is annoyed that Eddie will be one of the main witnesses in the prosecution because she didn’t see the knife. Meanwhile, the police take statements from all the staff. Matt reluctantly tells them that he did see Hitchens threaten Ash. Charlie suggests Ash go home, but he refuses.

Glen Quinn is annoyed to find that Emma has brought Jessica into A&E to be looked after by Adam. They are in the middle of a trial seperation and Adam looks smug at his discomfort.

Mike is also seemingly happy after building bridges with his estranged wife Anne. And Rachel asks for time off to go for counselling.

Shirley argues with her partner, Mark, before she leaves for work. She drives a minibus for the elderly and her emotional state affects her driving. In a lapse of concentration she hits a teenage girl, Chloe, and the bus runs out of control. At Holby, both Shirley and Chloe are brought in. Kate treats Shirley and suspects she is suffering from PMT after going off the pill. She is jealous of Mark having children from a previous relationship and hoped to have a child of her own, but when he finds out he dumps her.

Meanwhile Chloe says that she may be pregnant – as she has been seeing an aerobics teacher at a local gym. Her mum, Fiona’s girlfriend, Debbie, had been urging her to stop seeing him. Chloe tells her mum, that she didn’t tell her about her boyfriend, as she didn’t tell her the truth about her friendship with Debbie. But they all make amends and she discovers she isn’t pregnant after all.

Ten year old Danny finds his alcoholic father, Russell, unconscious and calls an ambulance. Danny says they have no relatives but Jude discovers through their GP that Russell’s mother-in-law, Maureen, is still alive. It transpires that Russell’s wife had died two years earlier in a climbing accident; a depressed Russell blamed himself and so did Maureen. For the sake of Danny, Maureen decides to look after the boy until Russell gets himself better.

* Shirley – cuts and bruises to face after crashing minibus.

* Chloe – fractured femur after being hit by minibus.

Adam : All I’m saying is if some thug comes at you with a knife, you’re not gonna…

Rachel : They didn’t find a knife though, did they?

Jude : Well it sounds like that’s what you’re saying Rachel

Charlie : Listen, Martin Ashford is a very popular bloke around here, this is actually starting to affect morale.

Police Officer : Yeah well it isn’t exactly a barrel of laughs for us either, ok.

Police Officer : Yeah so am I (Ash walks over, unbeknown to Charlie)

Charlie : Come on, just between you and me, how’s it looking for Ash? (the police see Ash and walk off shrugging) Thanks (Charlie then turns round and sees him, and rubs the back of his head)

In this article:Ashley Pharoah, Cas Series 9

S9 E5 (15 Oct 94) : Love and Affection by Billy Hamon Episode Summary Staff are surprised to see Mike when he turns up...

S9 E6 (22 Oct 94) : Negative Equity by Andrew Holden Episode Summary Rachel has asked to not be put on triage or late...