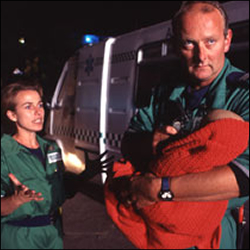 A retiring dective constable finally comes clean about the illegal activities of his partner, who caused an accident in which the detective was badly injured and other lives put at risk. And a suicidal roman whose own baby died before it was christened steals a sick baby from the hospital; she takes the child to be christened, and Josh and Liz search frantically for the church.

Ash supports Jude’s nomination for union shop steward. Charlie tells Baz he wants to finish their affair. For the rest of the night shift they avoid eachother. But early next morning, Baz turns up on his doorstep begging him to think again and seductively leads him to the bedroom.

In this article:Cas Series 10, Tony McHale