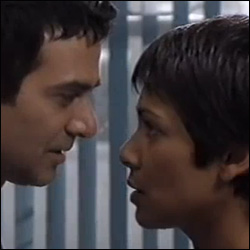 Alex comes back to work and uses Tom’s old office to work in. Alex feels bad when one of his old patients is brought onto the ward with breathing difficulties. Ed takes the patient into theatre but when coping alone he is unsure of what he should be doing and Zubin suggests he calls Alex to help. Alex goes to help Ed and assists him through the operation. Ric snaps at Alex for the implications he could have caused by being in theatre as he isn’t well enough to operate. Ric speaks to Alex a while later when Ed has thanked Alex and Ric apologises for shouting. Alex writes his letter of resignation for Ric. As Alex goes to hand his letter into Ric he bumps into Sandy. Alex says goodbye to her and kisses her cheek. He leaves his resignation letter on Ric’s desk and leaves. When bumping into Diane he says no to going to the bar and he’ll go in the future.

Diane and Kelly admit a patient onto the ward as Diane watches Alex. Ric and the Trust Executive, Helen Grant, discuss Sarah Palmer’s death and the up and coming review. Ric is asked by Helen about whether they have any skeletons in the cupboard as Sarah Palmer’s test results come in – the morphine pump may not have been working adequately. Diane and Ric see a patient, Linda, who has liposuction whilst on holiday – which has left her with an infection. When Ric asks for Alex he’s told Alex is in theatre. Zubin is stopped by Helen and asked whether Ric is up to being Clinical Director – Zubin encourages her about the kind of man he is. Ric is told that he has the job of Clinical Director. He bumps into Zubin and the two of them talk. Ric tells Zubin he’s like Obi-Wan. Zubin congratulates him on being Clinical Director as Diane walks over. Diane and Zubin talk about Sarah Palmer’s death, to which she makes a comment on the nurses which is overheard.

Owen is asked by Chrissie to sign the divorce papers. Tricia snaps at Owen when she comments on him signing paperwork for the ward and whether he can still sign his name. The patient on Maternity has the signs of pre-eclampsia – they take her in for a caesarean section and the baby is delivered – yet shortly after recovery the patient goes into a pre-eclamptic fit. Chrissie and Owen discuss the divorce when Owen goes to see her. Mubbs and Rosie talk about her blood test. The couple in maternity argue – Rosie snaps at the patients partner. Mubbs takes her into an office and comforts her – by wiping her tears, the two of them nearly kiss. Owen goes to Tricia’s where they kiss. Owen shows her the divorce papers which she will witness him sign. The two of them sleep together and Owen asks Tricia to turn so he can lean on her back and sign the divorce paper. Tricia does so and looks guilty at what she’s doing.

-Linda Donnelly, a 25-year-old who has got a wound infection after a liposuction in Spain, they take her into theatre, but she arrests and dies a while after waking up

-Andrew Murray, one of Alex’s old patients with a heart problem, fractured ribs and problems breathing after crashing his car. Alex later notices that there is something strange with him, apart from the fact that he is using a fake name, and suggests he might have small epileptic seizures – something that might have caused the crash.

-Pam Wilkinson, a 53-year-old giving birth to her first child. She shows signs of pre-eclampsia and they have to do a c-section. Later, after giving birth, she suffers from a shock.

[The doors of the lift open and Alex steps out, at the same time as Kelly is bringing Diane a new patient]

Diane: The name of the clinic?

Kelly: It was somewhere in Spain.

[Owen and Tricia are lying in Owen’s bed, when Tricia suddenly notices how late it has got]

Tricia: Is that the time?

Owen: You’ll only miss the trailers. Anyway, we’ve got some business to attend to. Turn over.

[Owen picks up the divorce papers]

Owen: I need something to lean on.

[Owen signs the papers against Tricia’s back]

Owen: That’s it. It’s official. Me and Chrissie are finished.