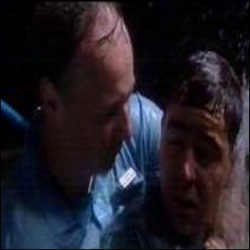 It’s new years eve in Holby and the new year certainly starts with a very big bang! Chloe is in high spirits and is getting on everyones nerves throughout the shift.

Nineteen year old Ben Lewis comes sniffing around the A+E ward. Max notices him going into a cubicle and catches him stealing used syringes. He calls on his own experiences with his son Frank and then fetches him some clean ones. Ben pleads for some methadone but Max refuses.

Holly recives a birthday card and assumes it’s from Patrick. When she asks him about it he denies sending it.Two friends, Sophie and James, go out to a new years eve party. They flirt outrageously all night but later on, Sophie slips on the stairs and lands on some glasses. She is taken into A&E, and at the hospital, James admits to Holly that he loves Sophie.

Sally gets in the way constantly on the ward and when she later tells parents that there daughter has died, Charlie shouts at her. Barney sees her out. She then sees a party going on and decideds to head for it but she falls down a hole and hurts her ankle. No one can hear her tearful plees for help.

When Spencer calls for a truce between him and Barney, he gest a cold and spiteful reaction. As Barney storms off outside Spencer follows him. They then hear Sally’s cies. They both rush to her aid and Barney has to climb into to help her out. Between the two men they manage to get her out. Barney had gone into the hole to help Sally and realises his foot is stuck. he shouts at Spencer to get sally inside and come straight back. He does so, but in Barney’s struggle to pull himself free he bursts a water pipe and the hole begins to fill.

Spencer hands Sally over to Patrick and Colette and rushes outside to Barney. However, Amy stops him and asks him to look after reception. An agitated spencer grows incresingly nervous but is unaware that Barney is in increasing amounts of danger as the hole fills with water outside.

Sally only has a sprained ankle. Patrick asks her if she has had T.B. and she says yes. It still shows up on her chest x-ray and Colette asks her about it. She admits that she can’t have children and that when she was younger and ill, her brother died. Her parents didn’t tell her untill she was better. That was why she told the parents earlier about their child dying.

Amy finally returns and Spencer dashes outside to Barney. he is up to his neck in water and Spencer leaps into help him. After many attempts he manages to get Barney loose and they clamber out of the water coughing. Luckily, nothing is hurt- apart from their pride when Charlie catches them!

Ben Lewis is rushed into resus having taken a heroin overdose. Max manages to save him; but Barney discover the syringes. Max tells Barney to forget it and throws them in the bin. But Ben’s Mum (Amanda) has already noticed…

The team count in the new millenium from Dan’s watch and enjoy a glass of none alcoholic punch. As Big ben strikes twelve, Dan kisses Holly, but her look suggests she’d rather be with Patrick. Colette and Josh also share a kiss.

Meanwhile, Amanda tells Max that Ben could’ve killed himself with the needles Max had given him- and that she will take the matter further.

*Sophie – Falls on table at new yrs. eve party, glass in her stomach.

[Josh helps Charlie out of the ambulance]

Charlie: I’m not a cripple yet you know!

Spencer: [With wheelchair] You’ll be putting us out of the job next. Now come on!

Spencer: Yeah, yeah of course you are. Now you just put your feet up there and enjoy the ride. [To Josh] Happy new year.

Charlie: I don’t think this is the time or place for this.

Max: No it’s alright Charlie, I knew what I was doing. [To amanda] I gave Ben clean needles so he didn’t infect himself.

Amanda: He could’ve killed himself with those needles! he could’ve died! I’m going to make sure everyone knows what you’ve done!

* Holly’s card read: ‘Happy Birthday, I wish I was spending it with you.’

In this article:Cas Series 15, Suzie Smith