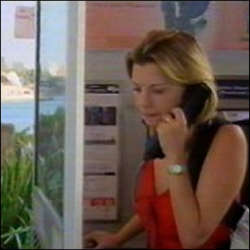 Tina is in Sydney. She tries to phone Sean but there is no answer. She phones Tourist Information to find out how to get to Alice Springs, and catches a coach there. She starts asking people if they’ve seen Sean, showing them a photo, and is soon pointed in the direction of Byron, who is sitting watching the giant chess games. She shows him Sean’s photo and Byron recognises him. He tells her that Sean fainted when he arrived; his daughter, a GP, helped Sean and since then, Sean has been helping her out. They’ve been in the bush for two days, waiting to deliver a baby. Byron offers to drive Tina out to them and they set off. As they are driving across the scrub, in the middle of nowhere, Byron suddenly blacks out; the truck skids off the road and comes to a halt. Tina tries to revive Byron but fails, though he’s still breathing. She tries to start the truck but the engine won’t start. She sets off on a path, following a signpost to a village.

Holby A&E is filling up with patients waiting for beds. St. Thomas’s A&E has had to close because of the flu crisis, so everyone is now heading for Holby. Ray Benson has been waiting all day for a bed, and is getting desperate. He eventually offers money to Adam, hoping it will get him a bed; Adam says money won’t help as there are no beds available. Ray starts throwing the money at him. Charlie is passing and calms Ray down. Ray apologises for his behaviour, saying it’s not like him, and asks Charlie to tell Adam he’s sorry.

Josh and Penny are called out to Martin Cross by his neighbour Ruth. He has scalded himself but Ruth says that’s not the real problem; Martin has Aids and also has pneumonia. He is taken to A&E where Patrick treats him. They ask Martin if they should contact his next-of-kin, his mother, but Martin doesn’t want them to. He says that it only upsets his mother to see him like this, so they agreed that she wouldn’t have to. Martin knows he’s dying. Patrick is pushing Adam to find Martin a bed. Adam says this is because Martin is HIV positive and Patrick wants to get him out of the department as soon as possible as he’s scared Martin will infect him by breathing on him. Ruth comes into A&E and Patrick talks to her; she tells Patrick that Martin wants his mother to remember him as he used to be, with some dignity. Patrick goes to see Martin. He’s read Martin’s notes and found out that he’s been doing drug trials. Patrick suggests he join a drug trial scheme starting here next month. Martin says it won’t stop him dying, but Patrick suggests it might give him more time to see his family, to see his mother. Martin says he doesn’t want to see his mother.

Paul’s mates, who are all drunk, tie and chain him up then lock him in a car boot. He has a small cut. Later, as they are clearing up the mess from their party, Jenny arrives and asks where Paul is. They tell her what they’ve done, saying he was going on about Houdini. Jenny rushes out to the car, just in time to see it being driven off after being broken into. She tells the others that Paul’s a haemophiliac, and if he cuts himself, he won’t stop bleeding. The car thieves eventually hear a thumping from the boot. They open it, see Paul, and close it again, then run. Paul is bleeding heavily. Later the police open the boot and find Paul. They call an ambulance.

Sean and Byron’s daughter Katie are driving to the airport. Sean is going to catch a flight to Sydney to see his friend Tim Jenkins. They pass Byron’s truck and Katie recognises it as her father’s. They get out and find him, still only semi-conscious, in the truck. Katie says he shouldn’t be driving as he has a condition which makes him keep blacking out. They take him to the nearest hospital. Sean is going to stay with Katie and miss his flight, but Katie tells him to go. They hug and say goodbye. Later, when Byron comes round, he starts talking about Tina; he tells Katie he was driving her out to see Sean. Katie rushes out of the room.

Tina, having found that the path leads nowhere, heads back to the road. She arrives at Byron’s truck and finds that he’s gone. There is no one around and the truck still won’t start. She sets off walking back the way she came.

Joanne Foster arrives home, having told Gemma she’d gone to work. Gemma tells her that the supermarket rang to say she’s had her last chance and shouldn’t bother to go in again. As Holly returns home from work, she says hello to Gemma; Gemma tells her that her mum had told her she’s not allowed to talk to Holly anymore. Holly is having problems sleeping because of baby Zoe’s crying. When she’s asleep, though, Gemma comes knocking at her door, asking her to come and see to Zoe. Holly does so, and manages to help Zoe. Joanne returns home again to find Holly there. Holly tries to say that she came round after hearing Zoe crying, but Gemma tells her mum that she went to ask Holly for help, because she wasn’t there. Joanne is angry, saying that Holly is turning her family against her. She starts shouting, but ends up sobbing in Holly’s arms. She talks to Holly, who tries to persuade her that she can get help for her drinking and depression without the family being split up. Joanne agrees to get help. She asks Holly to stay for tea, but Holly says she has to get back to work. Joanne gets angry again, saying that Holly says she’ll help but won’t. Holly says she’s told Joanne what to do, now it’s up to her. She is about to leave when Gemma screams at her mum that she wishes she were more like Holly. Gemma runs past them and outside. Holly runs after her, and Joanne follows. Holly catches up with Gemma and puts her arms round her. Joanne comes up, grabbing them and telling Holly to get her hands off Gemma. They struggle, and Joanne pushes them away from her into the road, just as a car is coming. Gemma and Holly are both hit and lie in the road…

In Australia, Tina collapses in the baking heat…

[Charlie comes into work. There are patients everywhere, even on beds in the corridors.]

Tina lies on the ground in the Australian outback.