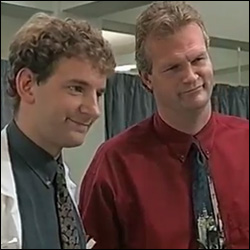 A man with painful ankles arrives in casualty with his wife, his son, and his son’s football coach. He is convinced that his wife is having an affair with the coach. Dave examines him and thinks he has blocked arteries. His son tells him that he is the one having an affair with the coach, not his mother. The man believes his son is just pretending to be gay to cover for his mother’s affair.

A stress management course proves too much for two men in their fifties. One collapses in a boat and is rushed to casualty, where Mike diagnoses a heart murmur brought on by rheumatic fever some years earlier. In reception the other man collapses and later dies of suspected pancreatitis. The woman on the course is distressed – she had been having an affair with him. Mike is angry because neither man was fit enough to go on such a course, but the company’s boss blames the two men for not declaring any health problems on the application forms. As he leaves the hospital, he is attacked in the car park by the dead man’s wife and mistress, and stumbles back into reception covered in blood.