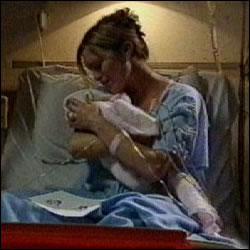 Chrissie is rushed off her feet in Darwin. She can’t find Alex and she hasn’t got a bed sorted for her latest patient. She snaps at Kath when Kath offers to look after Darwin for her. Alex tries to get his doctor, Ethan, to change his medication for the tremors. Chrissie moves the box of Steve’s belonging to her office as Diane watches. Diane and Ric talk about what happened – her termination. Kath looks after their patient as Ric and Diane talk to him.

Alex, Tom and Ed discuss where each patient needs to be fitted in for theatre. Alex has an appointment with Ethan during the afternoon. Alex tries to talk his patient into going through with her procedure. Alex and Sandy also try to persuade their patient to stay. Tricia asks Chrissie if she can stay out that night since she has a date.

Kath speaks to Chrissie in the staff toilets. Asking her what’s wrong. Chrissie admits she’s been experiencing pain, like period pains. And also some bleeding. Kath says she has to go to Maternity. Chrissie agrees to go even though she doesn’t want to. Chrissie thanks Kath. Kath tells Sandy and Ed that Chrissie’s gone home. Although Ed questions the fact Chrissie’s coat is in her office. Chrissie goes to Maternity and is checked over by Mubbs before taking a turn for the worst. Kath tells Tom that Chrissie is being taken into theatre. He tells Ed to go down. Owen takes Chrissie to theatre as Ed turns up. Owen is not pleased at this and tells him he should go. Tricia follows them to theatre two. Ed stands in whilst Owen performs the C-section causing friction with Owen.

Diane and Alex are both due in theatre. Ethan talks to Diane about Alex needing support. Diane goes to see him. Catching him taking the drugs he has prescribed for himself against Ethan’s orders. Diane demands he tell Tom before Tom comes into the room. Diane makes excuses and goes to operate with Ric.

OWen tells Chrissie he’s going to put her under anaesthetic. Owen delivers the baby – a girl. Chrissie is experiencing problems with her blood. Causing it to be decided she’ll go to ITU. The baby is having difficulties breathing and is on Scabu but has irreversible brain damage. Owen decides to be tested to see if he is the baby’s father. He decides to try and wake Chrissie early, even though Ed doesn’t think he should, so she can see the baby. Owen tells her about the brain damamge, which Chrissie is devastated about.

Diane gives Alex the drugs he’s using back and see’s Ric. Ric tells Diane Chrissie had an emergency C-section to deliver the baby and that it is likely the baby will die. Diane has to leave from telling her patient as she breaks down. Ric talks to her and lets her know he’s there to help but she didn’t kill the last part of Steve.

Chrissie says goodbye to her daughter as Tricia and Mubbs watch from outside, whilst Owen stands behind Chrissie. Chrissie cries holding the baby and rocking her alone. Owen stands alone in the darkness of his office, in deep pain at the loss of the baby. Diane also sits in Ric’s dark office, crying softly. Chrissie says she’s sorry to the baby as she rocks her.

Lucy Emmerson – Female patient on Darwin who Alex operates on as much as she feels like leaving. Her partner also suffers from Parkinsons.

Declan – Patient on Keller who needs an operation to save his bowel. He upsets Diane when snapping at her, through his own grief.

Chrissie Davis – Patient on Maternity as she is rushed in to have her baby daughter.

[Chrissie is on the phone]

Chrissie: Yes, Sister Williams again. I asked you to page Mr Adams, could you just check it was done? Okay, I’ll hold.

[While ‘Fields of Gold’ is playing we can see Chrissie rock her baby, while Diane, Ed and Owen all are standing somewhere on their own, upset and deep in thought]

>>Guide by Carly and Karin.