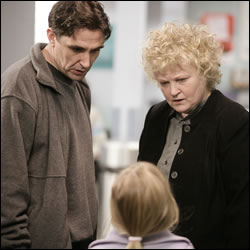 When Alice spots Abs sitting in his camper van, topless and sporting red hair, he reveals that he’s doing a sponsored sleep for Red Nose Day.

While most of the staff are trying to do their bit for Comic Relief, Nathan isn’t in the most charitable of moods and orders everyone to stop fundraising while at work. Kelsey snaps back that Harry would have allowed it.

Later, Angus Deayton arrives at the hospital for a splinter in his finger, and Sam cunningly ropes him into hosting a ‘slave’ auction. The female staff attempt to outbid each other for Guppy, and are surprised when Nadia secures the highest bid at £100. When uptight Nathan calls an end to slave auction, Alice stands up to him.

An illegal immigrant, Ali, who has broken into a school, is chased out by a security guard but injures himself when bricks fall on him from scaffolding outside. When the head teacher arrives at the hospital and threatens to report him, Maggie helps persuade her to be more symapthetic.

An elderly lady, Kathleen and her son-in-law, Steve, are both brought in after both suffering an overdose. Kathleen’s friend, Bernice, owns up as the culprit to Selena as she wanted to bring Steve’s domestic abuse of Kathleen to police’s attention.

Elsewhere, former nurse Megan returns to the hospital when her grandson, Colm, is admitted for self-harm and is suffering a form of psychosis. Later, Colm gets into Abs’ van without him realising, and drives off. He accelerates around a corner and turns the van over but Abs manages to escape unharmed. Back at the hospital, his father, Sam, finds it difficult coming to terms with Colm’s mental illness whilst Megan gives Nathan a lesson in working at the hospital and manages to lighten his mood. Nathan congratulates staff on their fundraising efforts and continues to make donations of his own – to Alice’s ‘swear box’.

* Staff made a donation of £1 for every stupid suggestion they put to Nathan which he said no to.

* Following Alice standing up to Nathan, Angus says ‘Feisty – I like that!’

* Trying to give Nathan advice, Megan tells him ‘Everybody’s patient is somebody’s mother, somebody’s father or in my case grandson’.