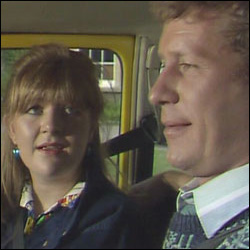 Charlie fine tunes his car, ready for Duffy, who is due to take her driving test at the end of shift.

Two taxi drivers, Ken and Les, are both brought in, after ammonia is thrown in their faces by a crazed woman, in separate attacks. Their eyes are irrigated, but Megan is worried about the safety of husband, Ted, who is also a taxi driver. She tries to call him, as does the taxi control office woman, Cheryl, who puts out a warning over the radio, but Ted has his turned off. Outside the cinema, the same woman gets into Ted’s cab – he avoids the attack, and talks to the woman for over an hour, he feels sorry for her. The police are then called to take her away, Ted makes a statement. When he collects Megan from work, he is thinking of retiring. Megan tells him she has cancer, and what her hysterectomy will mean for them.

Duffy’s nurse friend, Trish, is moonlighting part-time at a pub. A regular, Tom, gives her a lift home, as she gets out of the car, Tom attempts to sexually assault her, during the struggle her fingers are trapped in the car door. She demands him to take her to hospital, where Duffy treats her painful injuries. Duffy says she should report it, but she says she will lose her job and she needs the money. She says she is leaving nursing as she wants a higher paid job – Duffy questions her on job satisfaction or more money.

Leslie, an old man, brings in his poorly wife, Annie, who has been sick and has stomach pains. They have been at a private hospital, where a Dr Richards diagnoses her with ‘divoticulosis’, but Baz discover she has been wrongly diagnosed, and she has cancer. Leslie is distraught, and worries if his actions were right. Charlie and Baz argue over the situation of NHS versus private hospitals.

Ewart has a ‘business meeting’ with cleaning firm boss, Rose Sherman, at a restaurant, she is trying to persuade him to join into the contract, but he refuses. Andrew Ponting is annoyed that paramedics aren’t treated like other staff when he finds they weren’t invited to Ewart’s staff meeting. Ewart talks about the recent attack on a nurse in the x-ray department. Kuba puts up a new alarm system. At the end of shift, Duffy climbs into Charlie’s car – but it won’t start!

* Two taxi drivers, Ken and Les – both attacked with ammonia, and have irrigated eyes.

* Trish, Duffy’s nurse friend – traps fingers in car door, after she was assaulted by a regular at a pub she works at.

* Annie David, old woman, with stomach pains and sickness. She is wrongly diagnosed by a private clinic – Baz discover she has cancer.

* ‘Laughing Jack’ – regular, he was at a house in Birmingham, but it closed down, so he’s back to hanging around the department.

Clive locking up his bike and singing, Charlie arrives in his car;

Clive : Hey man, you have a whole place to yourself, why do you wanna park this yellow peril infront of my bleed, eh? This rust could be catching!

Charlie : Duffy’s big day tomorrow, I got the dream machine completely tuned up. There is no way she can fail in this little beauty my old son!

Charlie is working on his car;

Duffy : Is there something wrong?

Duffy : Good, cos I want to practice round the test course.

Charlie : Oh yeah, right I’ve checked the oil, filled her up with petrol. I’ve even pumped the tyres up, give her a go! (Duffy starts engine)

Charlie : Give her a bit of welly, she sometimes does that. (Duffy starts again)

* The attack in the x-ray department as on Nurse Sheila which happened last Tuesday.

* Ewart says there will be a District Manager’s meeting next month.

* In his cab, Ted reads a magazine on ‘Aircraft’.

* The woman carries her ammonia in a washing up liquid bottle.

* For Ewart’s date, he wears red trousers, and red/blue striped tie. To Mrs Sherman he says he ‘bought it in a sale’. Their meals comes to £43.50.

* As well as the two taxi drivers attacked and brought to Holby, another driver is taken to St Lukes.

* Roz tries to phone Ewart, she says he’s at a ‘business meeting’. 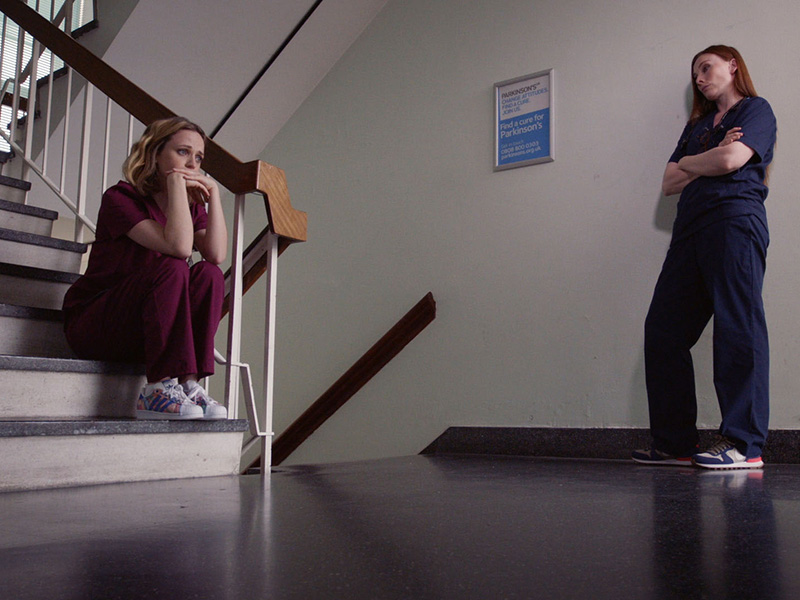 ‘Black Dog’ : Jasmine’s future in the hospital hangs in the balance after being caught out lying by Hanssen, Ollie decides to follow advice... 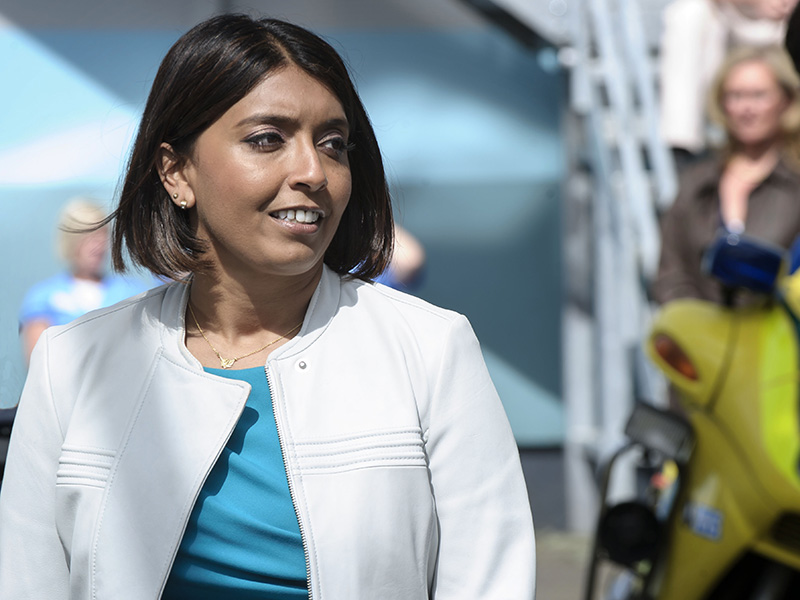 ‘Return to Sender’ : Connie has a complaint made against her, while Dixie continues to rage about Jeff – causing ripples through the department... 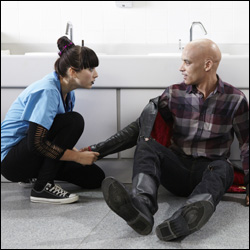 S14  E16 (31 Jan 12) : Here and Now by Matthew Bardsley Episode Summary Greg struggles to keep his distance from Sahira but is... 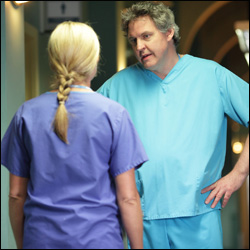