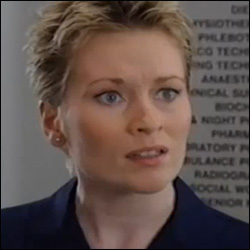 Meyer says that he can keep his emotional and professional lives separate and that Nick can’t. He says that the hearing was inevitable and that Nick shouldn’t be too confident as his confidence is mistaken for arrogance. He tells Nick that he walks the fine line between the two every day. He says that Nick’s actions affect him too as they work as a team. Meyer also wishes Nick lots of luck and says he’ll need it, despite saying that he doesn’t believe in luck..

Nick asks Victoria to say that he wasn’t rude and that he arrived to help Janice as soon as he could, saying that it’s not personal and about the hospital. He says that they must stick together as a team, like he was there for her last year when he found out she was taking speed.

Meanwhile, Danny asks Julie out again and it’s evident they’ve been on a few dates. She turns him down, however, saying that Rosie isn’t well. Danny asks Jasmine out instead and says that he and Julie are just mates. Danny tells Ray that after what happened with Victoria, he wants to keep his options open.

At Nick’s hearing, Victoria tells the truth and says Nick ignored her calls. She agrees with the chairman in saying that there was an error in communication and that she’s as to blame for that as he is. Karen tells the truth about what her and Nick were doing when Victoria called, and the chairman says that she’s as much to blame as he is and that he’s going to recommend her suspension. Nick tries to object and asks Karen why she got herself in trouble and she says that she’s taking responsibility for her actions.

Nick’s trial continues but there’s no sign of Nick. He has gone to see Janice’s sister and apologises for her sister’s death – saying he was to blame. He asks her whether he should resign and she doesn’t answer. He says he wants her forgiveness and she says that Janice would have forgiven him but she can’t. She asks whether he can forgive himself. Nick eventually arrives, just as the chairman says he is too late, but Meyer asks him to let Nick have his say and he agrees. Nick wants Karen and Victoria to be present when he gives his testimony and he admits he’s in the wrong and that neither Victoria nor Karen were to blame. He says Karen is his wife and that he loves her. The chairman revokes Karen’s suspension and gives Nick a written warning and says he’ll be monitored closely.

Meyer tells Nick that one day he will make a fine consultant and that he did very well. Nick tells Meyer that he intends to resign, and he wants to put his life at Holby behind him. Meyer tells Nick that he wants him to stay, and tells him, “You’ve got such good things ahead of you, it saddens me to think I won’t see them with you.”

Nick tells Karen he’s going to resign and says he’s leaving everything he cares about. She tells him she loves him but that it wouldn’t work and him being at a different hospital won’t make things any different. She thanks him for getting her suspension lifted and they hug. She later finds a note saying he’ll agree to the divorce.

Nick asks Ray to get a round of drinks in and then walks away. Victoria, realising something is wrong, chases after him and she thanks him for being nice about her to the chairman. He says that she’s a good doctor, hands her his hospital pass and drives off in his car.