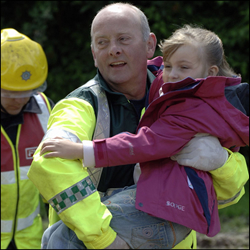 In ED Toby watches Adam deliver bad news to a patient’s family, but, unable to cope with the tension, Toby laughs at the worst moment. Exasperated, Adam sends Toby out on a paramedic shift where he can’t upset anyone else.

Tragedy strikes on a family walk when a car hurtles over a hedge, trapping Jack Hetherington against a tractor and knocking his daughter, Clare, unconscious. When the paramedics arrive Josh buries himself in his work, having earlier said a painful farewell to Devika and Sajani – he agreed he should stay behind in Holby.

The injured are taken to ED, where it is established that the driver, Stuart, has suffered a drugs overdose. The team learn that Stuart’s partner, Nikki, is already at the hospital, following her foster mother’s collapse earlier in the day. Nikki admits to the medical team that Stuart, who had just arrived back from a trip abroad, had smuggled drugs in his stomach … and she is in the same predicament.

Everyone is talking about the latest blog – except Ruth, who is furious to have earned the nickname Chuckles. Presuming Adam is the blogger, she proves a point about professionalism by wearing a red nose in full view of Adam as he passes on bad news to the relative of a deceased patient. Adam and Ruth have words, but she has made her point. Meanwhile, Marilyn has forced Harry to face the fact that for the financial good of the ED, either Tess or Charlie must accept redundancy. He calls them to his office and breaks the news that one of them must leave by Christmas.

Finally, Josh decides to follow his heart. Deep down he knows he is no longer committed to life at Holby, and he wants to go after the woman he loves. He rushes to the airport in the hope of joining Devika and Sajani on their flight.