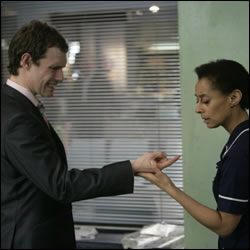 Tess and Nathan clash over the new cleaning company as the emergency department is in such a mess. Nathan wants to cut costs but pays the price when he pricks his finger on a discarded needle.

Tess is furious when a former patient, Adrian, comes back in to complain about Kelsey and Abs. Adrian is annoyed that Abs broke confidentiality to tell Kelsey, who he had been dating, that he had herpes. Although not happy with her staff members, Tess manages to get Adrian to leave by threatening to report him to the HPA.

However Tess is later impressed when Kelsey shows her caring side when she treats a dying man, Wilf, and tracks down his long-lost friend, from the war.

An HIV man, Dylan, is brought in after being hit by a car. Also a heroin addict and desperate for a hit, he steals a used needle from the department and is later brought back in after collapsing.

A former breast cancer patient, Joanne, feeling unloved by her partner, Alan, prepares to leave him. But she is injured as she pulls a suitcase from a top cupboard. In hospital they argue, and Alan leaves. He heads to the toilets, where he slips on the messy floor and falls unconscious. It’s a while before he is discovered, and Alice blames herself for not checking the toilets before putting an out of order sign on the door. However tests reveal he doesn’t have any serious head injuries.

The daughter, Kayla, of a dialysis patient, Christine, is electrocuted in the hospital radio room, when the DJ Paul pops out. She also dislocates her elbow. Christine is quick to blame Paul, and trying to make amends he connects them up by radio so they can talk to eachother, as Christine is unable to get down to see her straight away.

Nathan announces that Selena has got the Assosciate Specialist job and things are tense between Selena and Maggie. But when Selena helps treat Kayla, with Maggie, the pair clear the air.

* ‘I’ve got bigger things to worry about than your social life,’ says Tess, angry to Kelsey about Adrian’s complaint. 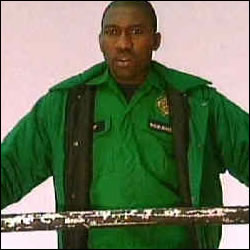 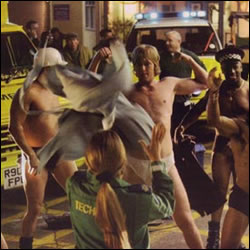