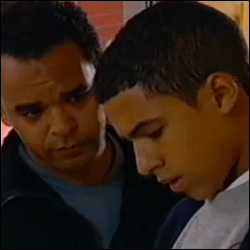 The Warings are trying to return to a normal life after the tragic death of Emma. Steve is returning to work, while Robbie is returning to school. Robbie’s feeling very hurt and angry that his mother’s life was taken so quickly and is taking it out on Steve, who is finding it hard to cope with. Robbie accues Steve of switching off the life support machine to gain the life insurance money – £75 grand.

Janice questions Steve about his decision to return to work, but Steve says he has to look forward. Meanwhile, Robbie returns home to find Steve has gone to work and mixes himself a strong drink in what appears to be the start of a major binge session.

Alistair is getting increasingly keen on Chrissie, and when he phones – pleading for a lunch date – Kath appears to have overheard the whole conversation, sending Chrissie into a panic. She tells Kath that it’s her mother and they’re organising Christmas lunch. A bouquet of flowers, with Chrissie’s name on, shows up -signed ‘A’. Everyone guesses who mysterious A is – Alex Adams? Anton Meyer? No one guesses that it’s faithful Alistair. Chrissie asks Sandy to distribute the flowers around the ward and give them to patients.

Robbie’s school call Steve and Steve goes home to find a very sick Robbie, who is fitting. He rushes him to A+E, where Casualty’s Dr. Patrick ‘Superstar’ Spiller loks after him.

Chrissie ends up spending her lunchbreak sleeping with Alistair in his bed. When Janice calls, Chrissie is clearly disgusted with herself and leaves.

Janice tells Steve that Robbie will make a full recovery. Steve is thrilled and asks for some time off to look after him. Steve goes to Robbie’s bedside and lets him know that he’ll stand by him.

Danny picks Luka up from nursery, and the pair are getting on really well. Marija appears to be falling for Danny even more after seeing, and the pair kiss passionately in the car park – unaware that Kath is watching them from a hospital window.

Chrissie goes to give Owen some papers and sees Janice and Alistair coming out of his office, they’re trying IVF again. When Chrissie and Alistair return to the ward, he finds the bunch of flowers he sent to Chrissie have been distributed around the ward. Janice goes home for a nap after the good news, she’s in need of rest.

Alistair tries to massage Chrissie and apologises for Janice calling. She says the situation is getting ridiculous, but he says he doesnt care because he loves her. She says that she doesnt love him and it’s over.

Janice climbs into bed for a nap, and underneath her bed we see Chrissie’s name badge, ‘Christine Williams – Ward Sister’…

Ajay Kapur (Deepak Verma) is brought in with his alcoholic father Ranjit (Madhav Sharma). Ranjit nearly kills his son by injecting him with too much morphine. His wife, Nisha (Madhur Jaffrey), makes the decision to leave them.

Lee Bullock (Nicholas Tennant) a long distance lorry driver with a heart problem is put under more strain, when two women Shona (Connie Walker) and Pauline (Jo Cowen) each think that she is his wife.

In this article:Chris Jury, HC Series 4 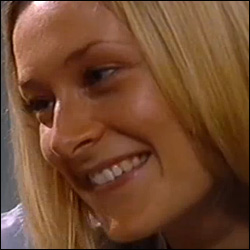 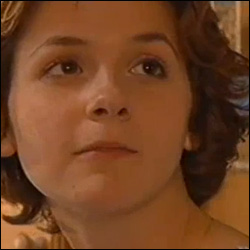 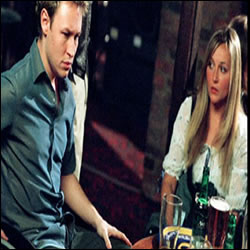