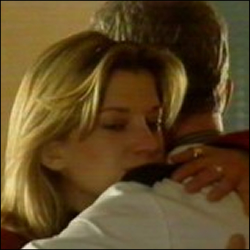 Tina hasn’t turned up for work yet. Charlie asks Max if he knows where she is; Max says that he was supposed to be seeing her last night but she didn’t turn up. He rings her at home and gets her answer-phone, then goes out to look for her. He returns, having failed to find her, and sees her in the staff room. He asks where she’s been; she says she couldn’t sleep, so she went for a drive but her car broke down. He asks about Sean, and whether she spoke to him at the station. Tina says she did, briefly. Max asks about the way she rushed off to the station when she heard Sean was leaving, and starts to realise that something was going on between them. Tina just says that Sean’s halfway to Australia by now. Later she says sorry to Max about earlier and asks to see him tonight.

Kate Ferris tries to talk to her boyfriend Mark Johnston, but he’s completely uncommunicative – they haven’t talked for ages. She goes to work. She phones home, but Mark’s out, so she leaves a message on the answer-phone saying that she’s not coming home – she’s going to stay with her dad for a while. Later she returns home, and finds Mark has slashed his arm several times with a knife. She takes him to A&E.

Chris Collins drives like a maniac to get to A&E with his brother Michael, who has been stabbed. Their mother Stella is with them. They say that Michael was fitting out their new shop; they left him alone and came back to find him in this state. Michael is seriously injured; he is taken up to theatre but he isn’t out of danger.

Patrick is treating Mark and isn’t being too sympathetic, especially as Mark has another self-inflicted slash on his arm which is just starting to heal; Mark accuses him of being judgmental because he harmed himself and starts shouting. Max goes to see what’s going on and says he’ll treat Mark himself. He mentions the duty psychiatrist to Mark but Mark says he saw him last time and it didn’t help. Max tries to find out why it started. Mark says self-harming is a release of tension and he’s been harming himself for months; he started about three months ago. Max asks if something in particular set it off. Mark says he feels dirty inside; Max says a friend of his said that to him, but had a good reason: she was raped. Mark confesses that he was raped, but hasn’t been able to tell anyone; as he is telling the story Kate comes in and listens. He says he traced the men who raped him; they are brothers and have recently bought a shop. He went there this morning and one of the brothers was there; he confronted him. The man wouldn’t admit that anything had happened; Mark says he lost it and ended up stabbing one of the brothers. He says he’ll go to the police and tell them everything. He tells Kate he’s sorry; she says it’s OK, they’ll make it right together. Max asks Patrick about Michael, the stab victim brought in earlier, and realises that his injuries fit with Mark’s account of the man he stabbed.

Holly’s next-door neighbour Gemma comes into A&E with her baby sister Zoe, asking to see Holly. She tells Holly that Zoe isn’t too well. Holly gets something to clear up Zoe’s ear infection, but tells Gemma that her mother should be looking after Zoe. Gemma asks Holly to promise not to tell anyone, especially social services, then tells Holly that her mother drinks a lot, and that she has to look after the kids all the time. She asks Holly to come and check on her brother Jake; when Holly says it’s complicated she gets angry, so Holly agrees to go. She later explains the situation to Charlie; he advises her to call social services and Holly does so. As she leaves the shift, Gemma’s mother Joanne is waiting for her. She knows Gemma came to see Holly; she says Gemma makes up stories and she doesn’t want Holly to get the wrong end of the stick. Holly says she was just trying to help. Joanne tells her to leave them alone, and not to get involved in things she doesn’t understand.

Lenny Adams has collapsed and fallen in a silo; Josh and Penny get him out with the help of the fire brigade. They suspect he has had a heart attack. He is taken to Holby A&E. His friend Jim phones Lenny’s wife Carol and asks her to come in; before he knows this, Lenny asks Holly to call someone else. When he finds out Carol is on her way in, Lenny panics. He tells Jim he’s got another woman, Danielle, who’s coming in, and asks Jim to help him keep them apart. Jim is reluctant, as he knows Carol well and doesn’t know how Lenny can do this to her, but he agrees. Lenny says he wants to leave Carol for Danielle but can’t. Carol arrives, with their son Bobby, and goes in to see him. Later Danielle arrives, with her and Lenny’s daughter Victoria. Charlie tells Lenny that his wife has arrived, and Carol says yes, she’s his wife. Jim manages to keep the two apart for a while. In reception they get talking to each other, but don’t realise what’s going on. As Danielle is with Lenny, Carol is waiting in reception.

Bert, a drunk who’s been in A&E all afternoon, asks Carol if Danielle’s her sister, and says that he saw her with Lenny. Carol goes to see what’s going on. She pulls back the curtain to see Danielle with Lenny and starts shouting at Lenny, saying she knew he had someone else but didn’t know who. She accuses Danielle of having an affair with a married man; Danielle says Carol’s the one doing that. They both shout, “I’m his wife!” They realise that Lenny’s a bigamist. Lenny tries to make excuses. Carol gets angry and starts attacking Lenny. She is stopped, and leaves. Danielle also walks out on Lenny.

Tina goes into Charlie’s office. She tells him she’s leaving. Charlie is shocked. Tina says that before the parachute jump she always took calculated risks, and thought things through, but it was too safe; she feels like life is rushing past her, and wants to take some chances, and do something that scares her. Charlie says he thinks she’s one of the best nurses he’s ever worked with; he suggests she take a holiday to think about it. Tina says she doesn’t want to think about it; if she does she’ll wake up tomorrow and change her mind. She says she’s sorry, and she didn’t want to let him down. Charlie asks if it’s about her and Max; she says it’s not, it’s about what she wants. She says the thing people hate most about hospitals is the smell, but it’s probably the thing she’ll miss most. Charlie hugs her and says he’ll miss her.

Tina talks to Max. Max reminds her that things went wrong with Sean before. Tina says that after her rape it was hard to trust a man again, but she trusted Sean, and then when things went wrong she couldn’t bring herself to forgive him, but now she has. Max says that one day she’ll look back and realise what a good thing she had with him. She says it hasn’t been an easy decision to make. Max tells her he meant everything he said to her. Tina says she has to do what’s right; she can’t bear the thought of being without Sean. She says she’s going to be with him, in Australia. Max says she can’t just drop everything and go. Tina asks what’s to stop her. She says she wants to be with Sean. She says she thinks he understands. He holds her hand and kisses it, then lets go and watches Tina walk away.

– Mark Johnston, has been cutting himself

[A car drives very fast to come to the hospital, nearly crashing into several cars on the way. In the backseat of the car a woman is holding his injured son.]

Max: You can’t just drop everything and go.

Max: Tina, this is crazy.

Tina: Is it? Max, what’s to stop me? I wanna be with him. You understand, I think you do.

[They stand there for a while. Max takes Tina’s hand and kisses it. Tina walks away. ]

In this article:Cas Series 14, Graham Mitchell