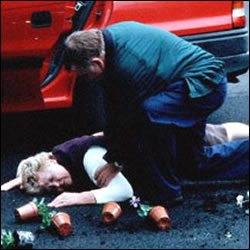 Stan’s wife Hattie is removing some plants from their car when she collapses.

Liam’s at work and clearly hung over. Chrissie, Liam and Ric begin gossiping about Sam and how she didn’t tell Alex he was over the limit before he got in the car. Ric makes a comment about leaving them out of it because there’s another blood in theatre without adding theirs to the mix –He doesn’t realise Sam is stood behind them and has heard.

Hattie is admitted onto Keller. She has a distended stomach and Ric can hear fluid – He tells Hattie he’d like to drain it off and do some tests.

Chloe Edwards – A young woman with learning difficulties is admitted onto Maternity. The injections to help her condition aren’t working so they’re going to use a laparoscope to find out what’s going on.

Ric apologises to Sam for earlier and offers to buy her lunch.

Chloe’s in theatre. Mubbs has found fibroids, but they’re too big to remove laparoscopically so they decide to open her up.

Kate McIntyre arrives in Maternity – She’s in labour but doesn’t know if it’s her due date. Her baby’s breached.

Ric tells Stan that Hattie has cancer – There’s nothing that can be done. Hattie tells Stan that she received treatment from Ric a few months back – But made him say nothing.

Robbie hands Steve his wedding ring after finding it in a tub in the kitchen.

Steve asks Lisa out on a date.

Ric apologises to Sam for missing their lunch date. She then asks him if he wants to meet up later.

Down on Maternity Late McIntyre has disappeared – She’s left the baby. Ben searches everywhere but can’t find her.

Stan leaves Hattie’s bedside for a moment to get a coffee. When he returns he finds that she has died.

A little while later, Ric goes to check on Stan – He enters the room to find both Stan and Hattie missing.

Ben does an interview to try and get Kate to come back.

Chrissie goes to speak to Owen again after being asked to come back when he wasn’t busy – He makes a comment that there must be something seriously wrong with her love-life if she’s coming to seek his advice. She tells him she’s had a smear test and that they’ve found pre-cancerous cells. She tells him her GP says she hasn’t got cancer, but she’s scared she’s going to get it. Owen reassures her.

Robbie presents Steve with a couple tickets for the football. Lisa walks over and is surprised when Steve introduces Robbie as his son. He tells her he’s sorry but he needs to cancel their date.

Ric and Sam are in the bar talking. She tells him she’s jinxed and that she feels sorry for any man she gets involved with. He tells her she never knows – Things might work out with Alex. She tells him they won’t, and then vows she’s off men forever.