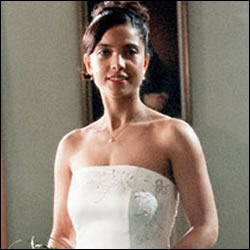 It’s the day that Dr Ric Griffin is supposed to be marrying Dr Sam Kennedy. After spending his stag night with ex-fiance, Diane Lloyd, and Sam’s ex-lover, Alex Adams, Ric manages to gamble away £20,000 that Sam has given him to pay off his ex-wife. After emerging from the casino Diane tries to make Ric see how stupid he’s been and that he must confess to Sam before the wedding ceromony. He protests that he isn’t completely mad, as Diane thinks he is, and the two of them make their way to the hospital to carry out the morning rounds.

Ric’s main concern is cancer patient Gary Sullivan. Gary had chosen to hide the fact so that he had been diagnosed with a having a cancerous tumour, so that he could set up life insurance and ensure his fiance was not left penniless after his death. After Gary collapses that morning, they realise he has only weeks to live. Gary has already asked Ric to ‘dispose’ of his file so that the insurance company will pay out; Ric is unsure whether or not to oblige. Kath befriends Gary’s young fiancée Sandra, who was homeless until she met Gary, and discovers that she is pregnant. Kath knows how ill Gary is but Sandra doesn’t and so Kath persuades Sandra that she must tell Gary straight away. Once Ric finds out that Sandra is pregnant and realises that she will be left alone with a baby when Gary dies, he agrees to ‘lose’ Gary’s medical record. However, Diane has discovered the files herself and sternly informs Ric that she will not stand for this as it could lead to prosecution for fraud and she will not put her career in jeopardy.

Over in Darwin Ward Alex is acting very hostile towards patient Alan Dawson. Alex believes that Alan is a ‘time waster’ having examined him six-months ago and giving him a clean bill of health. Alex continues to insult Mr Dawson to Sandy and Chrissie, leading Chrissie to taunt Alex about the fact that Sam is getting married today and that maybe that is the reason why he’s in such a bad mood. Her suspicions are confirmed when Alex tells Ric that he doesn’t deserve Sam, after Ric refuses to tell Sam about losing the money before the wedding. This leads to a full-scale argument in the corridor with Ric accusing Alex of being jealous.

Meyer does however feel that Mr Dawson is an urgent enough case to operate on but discovers that he has swelling to his abdomen whilst in surgery. This is inexplicable as Mr Dawson is not on any medication but thanks to some chit-chat between Sandy and Mr Dawson’s girlfriend, she finds that Mr Dawson has been taking pain killers that he bought over the Internet and it is these that have caused his illness.

Meanwhile, Sam is at home with Jess, Ric’s daughter, preparing for her big day. Jess appears to be more excited than Sam and keeps reminding her that its ‘the happiest day of your life’; until she finds a photo of Sam and Alex in Sam’s bedroom. Sam’s mum, Patricia, arrives and asks Sam when she realised that Ric was ‘the one’. Sam doesn’t reply but does admit that she loves him. Patricia keeps making comments that suggest she isn’t too happy about the wedding, and tells Sam that it’s not too late for second thoughts. Sam goes continues to get ready even though she is desperately hoping that Alex will ring. Alex does decide to phone Sam, to find out whether there is still anything between them, but Jess answers the phone and tells him Sam won’t talk to him. Ric eventually plucks up the courage to phone Sam and confess all just as Sam is leaving for the registry office. She answers her mobile, “Hello, Alex is that you? Alex speak to me”. Ric hangs up knowing that Sam still has feelings for Alex.

All of the wedding guests are congregated at the registry office but Sam has to sit alone at the front of the room because Ric hasn’t turned up yet. Despite Diane’s best efforts at phoning Ric to find out where he is, the registrar informs Sam that she will have to reschedule her wedding. An embarrassed Sam runs out, followed by Alex, who takes her home. Even though Sam admits to Alex that she wanted him to stop her from marrying Ric, and Alex admits that he did try to phone her, Alex agrees to run her a bath and leave. But, Diane has convinced Ric that Sam does love him because she was prepared to spend the rest of her life with him. Ric then turns up at Sam’s flat (conveniently whilst Alex is out of sight in the bathroom) and tells her that he was too cowardly to admit about losing her money and that’s why he didn’t turn up at the wedding. When Ric sees Alex he just laughs and says he hopes that the two of them will be very happy together, before storming out. Alex and Sam then have a heart-to-heart and kiss after declaring that they still love each other.

Owen’s wife Laura decides to visit her mum since the wedding isn’t going ahead, and so Chrissie offers to drive Owen and his daughter Katie home. Katie falls asleep and Owen and Chrissie can’t resist the temptation to sleep together, even though she has refused to become one hundred per cent committed to him.

Ric returns to the hospital and happily watches Gary marry Sandra from his hospital bed. Touched by this and the day’s events, Ric throws Gary’s medical file into the rubbish bin.

* Gary Sullivan – Diagnosed with cancer after finding a tumour in his stomach.

(Alex, Ric and Diane in casino. Ric is waiting to find out if the cheque Sam gave him will be accepted).

Ric : Thank you very much

Ric : Back off Diane

Diane : Ric! Alex will you stop him, it’s Sam’s money

Alex : What are you playing at?

Alex : She trusts you

The wheel roulette wheel spins and we then see Sam, sleeping with her wedding dress hanging on her wardrobe, before returning to the casino scene.

Owen’s daughter Katie walks in on him and Chrissie, kissing in bed together.

* The winning number on the roulette wheel is actually 20 black.

In this article:HC Near Marriages, HC Series 4, Suzie Smith