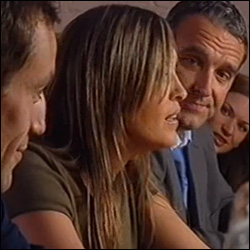 Terry arrives at Holby for a check up after his operation. Lisa declares that she knows his secret, but Terry’s safe – she’s talking about the impending divorce and not his cancer scare. Lisa begs him to reconsider. Terry talks to Kath and says he feels like he’s been given a second chance in life. He asks her out on a date, and she’s unsure. He tells her to stop feeling married and move on.

Lisa teases Danny about his relationship with Diane and says that she’s definitely the boss. An indignant Danny boasts that she was “putty in his hands” and a less than amused Diane looks on. When Danny suggests a romantic meal, Diane obliges – saying she needs to talk to him, which leaves Danny looking nervous.

Jess isn’t having another good day. She’s teaching kickboxing in her lunch hour to help pay bills and eat, but she’s still on a pitiful budget. Steve says he’s not sure whether she has the right attitude to become a nurse, but apologises for snapping at her. Jess replies that she’s grateful for his honesty.

Despite telling Chrissie that she’s gonna dump Danny, Diane gets clearly jealous when she sees Danny flirting with an attractive patient. Diane mockingly mentions his behaviour to Kath, who rudely declares that Danny is taken in by pushy women. Diane looks quite offended!

Chrissie cancels her night out with Diane after Owen says he doesn’t fancy it. Later though, she realises that she has to be in control (after some coaxing from Diane) and says she’s going anyway. He says that’s fine which upsets Chrissie, but later changes his mind and says he wants to be with her.

Terry and Kath are also going out for a drink, after much persuasion from Terry. An ecstatic Terry buys himself and Kath champagne, and gives Lisa a cheque for £10,000! Kath and Terry look cosy, and Lisa starts to accept that.

Diane confronts Danny about overhearing his conversation with Lisa, and proving she’s still very much in control invites a startled Danny back to her flat.

Kath asks Terry for details of his solicitor. He was right, she needs to leave Simon. But will Kath ever really be ‘not-married’?

Doug Payne, originally in AAU but complications occur and he is moved to Darwin for a bypass. He is being looked after by his obsessive son, Gareth, whose pregnant wife Michelle is less than happy.

Michelle Payne, wife to Gareth, has her baby in the stairway but luckily Lisa and Steve are there to deliver the baby safely. She delivers Gareth with an ultimatum, and he finally choses to support his own son.

Chris Scott is brought in after a house fire. He rescued his girlfriend’s daughter, Jade. The girlfriend announces she is leaving him for his boss, Ian, but Ian leaves when it becomes evident that Jade started the fire. Jade’s manipulative mother attempts to win Chris back, but to no avail.

Jess: Who are you looking for?

Jess: What’s he got?

Michelle : Something with his heart…

Kath: I was thinking bout what you said earlier…

Kath : You were right. I need to move on with my life. Leave Simon behind….and…I was wondering if your solicitor’s any good because I need to talk to one…