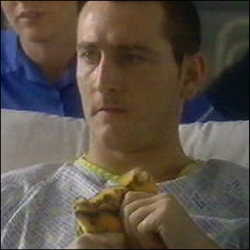 Lara is tired after spending the night at the hotel with Patrick – rumours of their relationship has already spread. Charlie is back from his visit in Canada. Jack nervously awaits his operation – Nikki arrives to see him with a toy tiger. Spencer is shocked to discover his daughter Gilly arrive as the new temp receptionist – even when she is under qualified for the job. Staff take part in a fete outside the department.

Jay Morgan, dressed as an alien, comes in after he suffers plastic burns to his head. He fails to chat up many staff members including Anna, Gilly and Nikki.

A young mother, Nerys, is brought in by the paramedics, after suffering an asthma attack. One of her children, Stanley, suffers from ADD – and his grandmother, Pat reveals Nerys has been selling his medicine for money. Colette decides to call Social Services and Nerys is distraught when her children are taken away. Colette and Pat fail to have any sympathy for her.

An elderly lady, Winnie, is left waiting six hours to be seen in a corridor, after suffering from food poisoning. Her son, Martin, arrives and is not happy – Dillon tries to explain the hospital management situation – not realising he is a journalist reporter. Martin tells Jan he will write an article, which does not please her and she tells Dillon off.

Samantha Griffin is brought in after collapsing and taken ecstasy at a party. She is disruptive and abusive and takes a swing at Lara – cutting her face. Lara, glosses over her treatment to try and discharge her as soon as possible – missing the fact that she is suffering from thyroid stones. As her condition deteriorates, Lara is annoyed at failing to diagnose her previously.

Charlie and Jan kiss in the hospital lift. After his operation, Nikki goes to see Jack – upset he tells her their relationship is over. Nikki begins to think he is happier without her, even when she tried her best to support him and Tony also tells him he is a fool – back in his ward at night, Jack cries clutching the toy tiger beside him.

[Lara is asleep in staff room, Patrick kisses her.]

Patrick : Yeah well that would be great if..

Patrick : If we were still in the hotel… [turns on staff room] come on, duty calls.

Nikki and Anna are in staff room;

Nikki : Maybe he’s right, maybe he is better off without me

(In a ward, Jack clutches the toy tiger and cries)