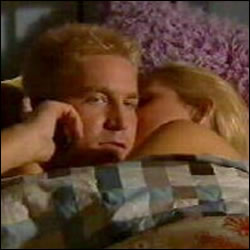 Harry and Duffy appear as witnesses for Lara’s court case, but Lara is not feeling optimistic since Melanie’s denial of her husband’s rape.

While in court, Duffy’s mother, Kate, is brought into A&E, where her condition worsens. She asks Charlie that she wishes not to be resuscitated, which when Duffy turns up, upsets her. Duffy is devastated when her mother dies, and finds a shoulder to cry on in new security guard, Ryan, outside.

Josh and Nikki take a call to an angina sufferer, Nicholas, who is stuck in a freezer. They find out he has had a heart attack, and Nikki wants to use a procedure that Josh thinks is too risky. He gives in, but the man’s condition worsens – which they realise is due to an enlarged prostrate.

A foreign woman, Marion comes in with her sister, Samira, after a car accident. She has a wrist injury, but are anxious to leave. Marion is discovered to have swollen bags of heroin and dies in CRASH. Samira tells Dillon, she has also swallowed drugs, but must leave as men have captured their children until they have been given the drugs. Dillon and Harry clash with Charlie over how to deal with the case. Charlie insists the police be called but Dillon claims they are innocent victims of extortion.

Heather, who is unhappy with Dillon’s interest in helping Lara, ignores him and flirts with Simon. Josh and Colette try to discuss their marriage difficulties.

The jury return a guilty verdict at Lara’s case. Lara is shocked to hear their decision.

Heather is in Dillon’s bed

Heather : Morning, now what do you want for breakfast? (phone rings – it’s Lara) Leave it

Dillon : (picks up) Lara, are you alright?

Man : Have you reached a verdict?

Man : Do you find the defendant Lara Stone, guilty or not guilty on the charge of unlawful killing

Man : Is that the verdict of you all?