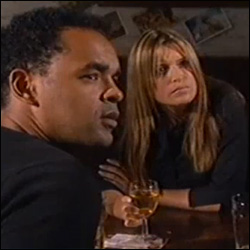 With his wife working the late shift, Alistair makes plans to see Chrissie after work. Chrissie suggests they should meet at her place, saying it is a better place than their office’s, because it has no filing cabinets with hard edges. Owen sees them together and warns him to be more discreet. Unaware of her husband’s disloyalty, Janice is trying to keep their marriage together and books a table at a restaurant instead of working late. Alistair has no choice but to cancel, so Chrissie retaliates by trying to make him jealous by going for a drink with Steve instead. Steve, however, has forgotten that he promised to spend the evening at home looking after his wife, and when Robbie comes to remind him of this he, too, has to leave Chrissie.

Ella Francis, a high-security prisoner, comes into Holby for an operation on a stomach ulcer. Ric discovers that she has a brain tumour that cannot be removed and that she is a convicted child murderer. Meanwhile, a mother is devastated when she learns that her young teenage daughter Jo has Wilson’s disease and needs a liver transplant within a day. When the prisoner hears of this, she requests to be a living donor. But her request is denied after she tells Jo’s mother about her killing her own child. By the end of the day Kath takes Ella to the bathroom and on the way Ella manages to steal some drugs. While Kath is brushing her hair, she talks about her past and admits that the father of the child she killed was her own father and that she still today does not understand why she killed her own daughter and she cries in Kath’s arms. When she gets back to her bed she commits suicide. She dies, clutching her donor card.

It is Marija’s first day as a cleaner at the hospital. To her dismay, she is put on Keller Ward with disapproving mother-in-law Kath breathing down her neck. Despite the acrimony, when Kath is left distraught and hurt after a run in with Ella, Marija shows support and sympathy, taking her home with her and Danny.

A nanny brings an ill baby, Ruby, to Otter Ward. At first Janice thinks that the child has been abused, because her arm has broken in a strange way, and suspects the parents. Ruby’s mother is rarely at home and admits that the baby scares her and she does not know how to handle the baby. They try to investigate the matter, when Ruby suddenly has an epileptic fit and they realise that she could have broken her arm while having a similar fit while being unsupervised. However, it transpires that the nanny is trying to get the parents to split up so that she can continue her affair with the father. When she realises this is not possible and that Janice decides that it is not necessary to get the police involved, the young nanny decides to leave her job, even though she does not have anything else.

Ruby Poulson is 9-months old and has a broken arm, possibly after an epileptic seizure

Ella Francis, a prisoner with a brain tumour, dies after taking an overdose while in hospital

Danny: Just put him in, it’ll be fine.

Danny: But I’ll be okay, so it’s worked for one of us!

Marija: It’s no good talking to this man, is it? I’m gonna miss you.

[Outside the hospital Kath is crying, upset about Ella dying]

Marija: You take everything too personally.

Kath: But she was my patient.

Marija: But that’s all she was.

Marija: Come home with us. And you and Danny and Luka and I can get something to eat together. Maybe a drink.