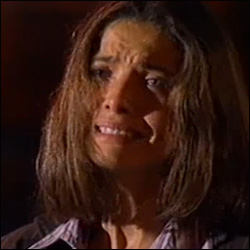 The episode begins with a terrifying flashback, and Sam reassures Alex that he’s going to be alright. He says he’s serious about her moving in with him and she says that she’ll stand by him. Chrissie urges her more to tell him that she spiked his drinks, but Sam says it doesn’t matter – he won’t be convicted.

The trial goes badly, and halfway through Alex tells Sam that he’s changing his plea to guilty. Sam finally admits what she did and begs for forgiveness, but he shouts at her to go away.

Sam later meets Jamie’s mother in the toilets, where Sam confesses what she’s done. Jamie’s mum confesses that she too lied, Jamie just ran out into the road and it wasn’t Alex’s fault. The mother then decides to change her evidence to the truth, and Alex is declared not guilty.

At the Valentine’s ball later that night, Sam wins the raffle first prize, of a weekend for two in Paris, but hurriedly gives it away, to Chrissie Williams, who realises there’s a more deserving recipient – the Sandersons.

Lisa and Steve, who have been flirting constantly throughout their organisation of the raffle, agree to meet up some time and it looks like romance could be blossoming.

Ric discovers that Tash is a lesbian, and is convinced that that’s why she never fancied him! Tash tells him that it’s never been a secret, most people know!

Sam runs after Alex in the carpark, but he can’t forgive her. He tells her to go home – it’s over between them.

Heather Farrel (Saira Todd), who it becomes clear is an old flame of Tash’s, is admitted to a ward for treatment of her varicose veins, following the birth of her second baby, but confesses to Tash that she’s also found a lump in her breast. Her husband Rob (Paul Warriner), discovers the truth about his wife’s sexuality and is very upset.

Bill Sanderson (Michael Medwin) is in for a minor cardiac procedure prior to taking his wife (Dilys Laye) to Switzerland on their second honeymoon. It’s found that he needs a more major operation than expected, as there is more wrong than originally thought. His condition is not helped by having just lost the £800 he was about to pay for the tickets with. Chrissie gives them the pair of tickets to France that Sam won in the raffle.

In this article:HC Series 4, James Stevenson 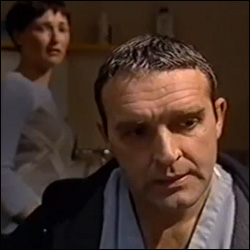 S4 E29 (23 Apr 02) : Letting Go by Susan Martin Episode Summary Liam regains consciousness, but needs an emergency operation, after which it is... 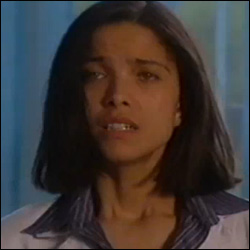