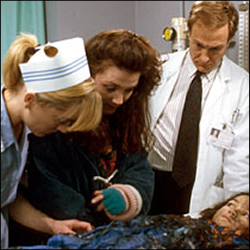 Beth faces the coroner’s inquest on the cancer patient, Mr Forrester, who she didn’t resuscitate. The Judge gives a verdict of suicide, angering his daughter, Karen, who threatens to sue Beth privately for negligence. A doctor advises Julian to go for the Casualty Consultantcy post.

Jimmy is helping his female friend Cath and her young daughter Jenny at a market stall. Jenny is left alone in the warehouse, undoing clothes packets, when one of the packets catches light on the boiling kettle. Jenny is severely burned and her injuries are made worse as they failed to remove the clothes and add cold water. Charlie, about to tell Jimmy off for being late, comforts him as he cries with guilt.

An athletics coach, Tim Talbot, brings in his sprinter, Gina Russell, who twists her ankle. It seems they fear a random drug test, the woman arrives in A&E to take a sample. But Gina also has palpitations and is taken to CRASH. She tells Tim she wants to give up athletics and she finds out from him the drugs she was taking were infact harmless vitamin tablets.

An old lady, who’s mentally handicapped, Sally James, is brought in after suffering a hypo and insults Kelly. She is on remand after burning down the last mental home she was at and is now homeless – her solicitor who comes in with her, says it’s not her problem. Sally asks for her daughter, Julie, and asks to go home with her, but she refuses. Duffy warns Kelly about her attitude and to treat every patient equally.

A policewoman, Susan Spencer, collapses in the street after a long shift. trying to ascertain the problem, Duffy discovers a retained tampon and realises she is suffering from toxic shock.

Cath in car. Her daughter Jenny and Jimmy are putting up the stall – water splashes on top of him.

Reporter : Delivery I need you to sign (opens door) Are you Dr Ramanee?

Beth : What is this? Who are you? (camera flashes)

Solicitor : Medical negligence against you.

Beth : And would she have a good case?

Solicitor : She probably wouldn’t even get legal aid.

* Beth has a yellow front door.

Alicia plucks up her courage to tell the police that she has been raped. Eddie accompanies the paramedics who are called out to treat...