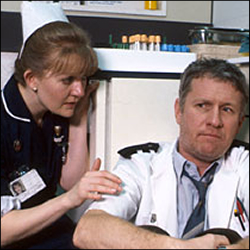 Charlie reluctantly sees a psychiatrist who diagnoses depression and urges him to seek treatment. Maxine meets her Dad and his girlfriend Shelley. Duffy tells Andrew she’s scared of losing him again – he says he’s not planning to go anywhere.

A rent boy, Steve, is pushed out of a car, after being gang raped and beaten. Surgery is needed for his rectal injuries. Rob treats him and persuades him to report it and tell his wife the truth.

Charlie treats a manic father, Joseph, who refuses to take the prescribed drugs that keep him sane. His son is losing his patience with him, but Joseph says the drugs make him feel like a zombie.

Teenager, Amy is brought paralysed after being given the birthday bumps. Her problems are complicated due to the fact she is pregnant, and reveals her boarding school teacher, Ben, is the father after an affair. Mike has a go at him and his uncaring attitude. Another student, Andrea, is also brought in with a twisted ankle.

At the end of shift, a tired and moody Charlie argues with Duffy and collapses in his office from stress.

* Amy Croft – paralysed after been given the bumps.

Clive : Make it a double.

Barman : OK, ain’t seen you before?

Barman : You here visiting or something?

Charlie : There’s nothing, there’s nothing else in my life! (sits on floor) what have I got to go on for Duffy? What Duffy?

S7 E7 (24 Oct 92) : One Step Forward by Peter Bowker Episode Summary Norma is still struggling to cope with her elderly mother and...