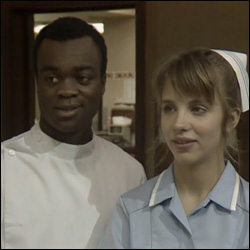 The department has had a facelift and on the first night, Charlie introduces Student Nurses Karen O’Malley and Cyril James. Dr Mary Tomlinson also arrives for her first shift, but receives a cold reception. Ewart invites Elizabeth Straker to shadow him for a shift, she is shocked at what they have to deal with.

An alcoholic man, Gerald, wakes up in a hotel, near the station. He comes from Manchester, and doesn’t remember how he got to Holby. He goes into the ‘Stag & Hound’ pub, where he has another drink. He then goes to Holby A&E, where Mary treats him. He is upset after having an affair with a woman Melanie – and her husband then killed himself after finding out, so she left him, this was six years ago. Mary urges him to give up drink before he dies.

Teenager, Lucy Cammack, comes in, she has an incontinent bladder. Mary discovers she has been having sex through her urethra, and she is desperate to get pregnant. She discharges herself. Tommy Harper, a famous footballer, goes home after drinking in the ‘Stag & Hound’, but after an argument with his girlfriend, he speeds off in his car. He hits Lucy, who then dies on arrival at casualty. Tommy goes through the car window, and suffers head injuries.

Julia, comes in with her neighbour, Ken, after being attacked by her ex-husband, Frank. But they come in again later, after Ken attacks Frank with a carving knife. Frank is taken to CRASH, where Duffy is shocked to discover he was the man who raped her last year. He dies in theatre, and she is not sad.

Susie has a flat warming party after the shift, which the staff attend. Charlie and Karen become close, which annoys Cyril, and Kuba tries to get Ewart drunk. Mary turns up, as well as Elizabeth, who is not impressed with the sight of drunken staff.

* Lucy Cammack – 16 year old brought in with incontinent bladder. She is later brought in and dies, after being hit by a drunk driver.

*Julia Taylor – brought in first, after being attacked by her ex-husband Frank.

* Frank Taylor – comes in after Julia’s neighbour Ken attacks him with a carving knife. Dies in theatre of chest injuries. Duffy discovers he raped her last series.

* Boy with pole stuck to his head.

Gerald in bed, finds cigarettes and drink empty, hears train go past, has suit on, coughs, looks out of window, unsure of where he is;

Landlord : Oh you’re up are you, well I have to charge you for the last two days

Gerald : Who the hell are you?

Gerald : What is this?

In Susie’s flat, an ambulance arrives outside, the staff chant ‘Here we go!’ over the balcony, Nurse Francine O’Dwyer goes to be sick in the toilets;

Elizabeth : (to Ewart) Getting to know your staff?

* Michael Garner (Geoff Pearce in London’s Burning) makes another appearance as a policeman.

* Duffy has been doing self defence classes since her attack.